How not to get engaged on Santorini 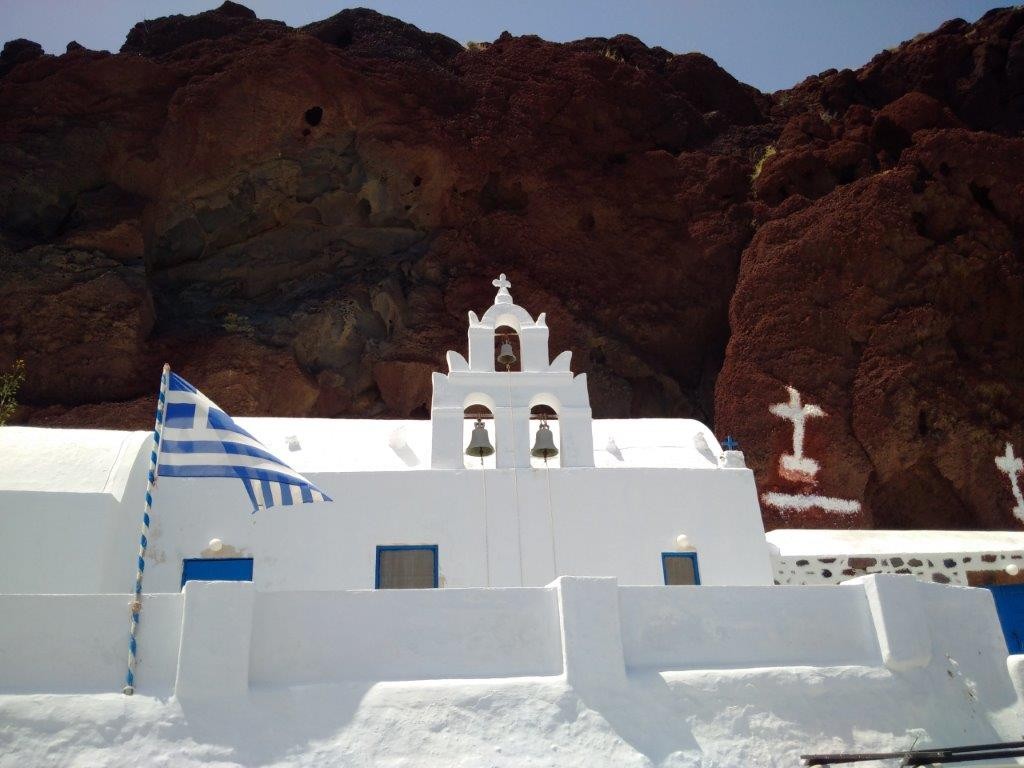 A trio of  grand new villas opening on Santorini, (see below for details,) makes a trip to the Rock, as it is known affectionately by locals, imperative, and my daughter and her boyfriend felt that I needed the help of a romantic young couple, as that is what Santorini does best. I had a faint hope that after 6 years of going out together, they might finally decide to get married, and as Santorini is all about its sunsets and churches, as well as its technicolour beaches, I took them with me. Plus a spare engagement ring I happen to have for emergencies. Always prepared, that’s my motto. 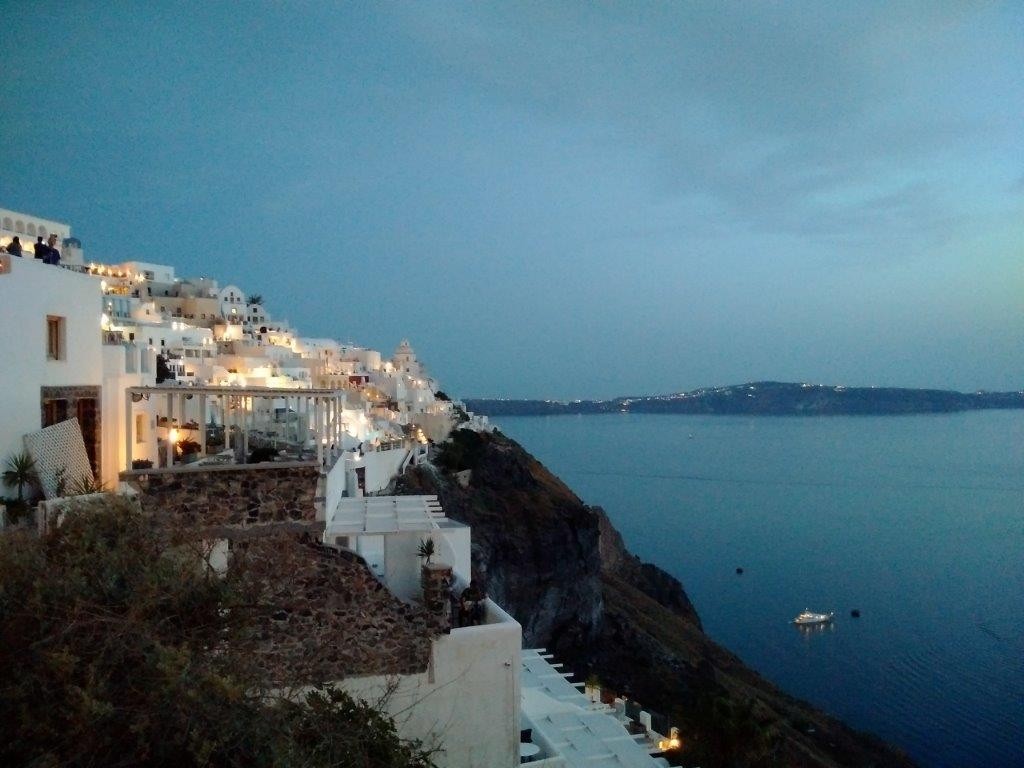 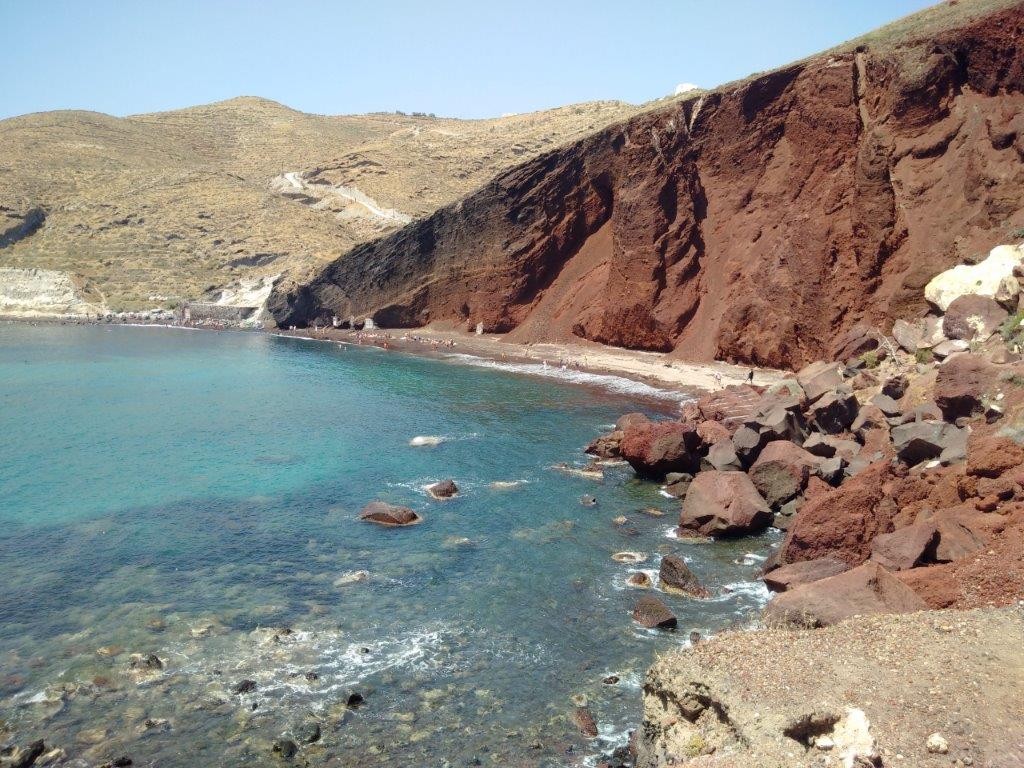 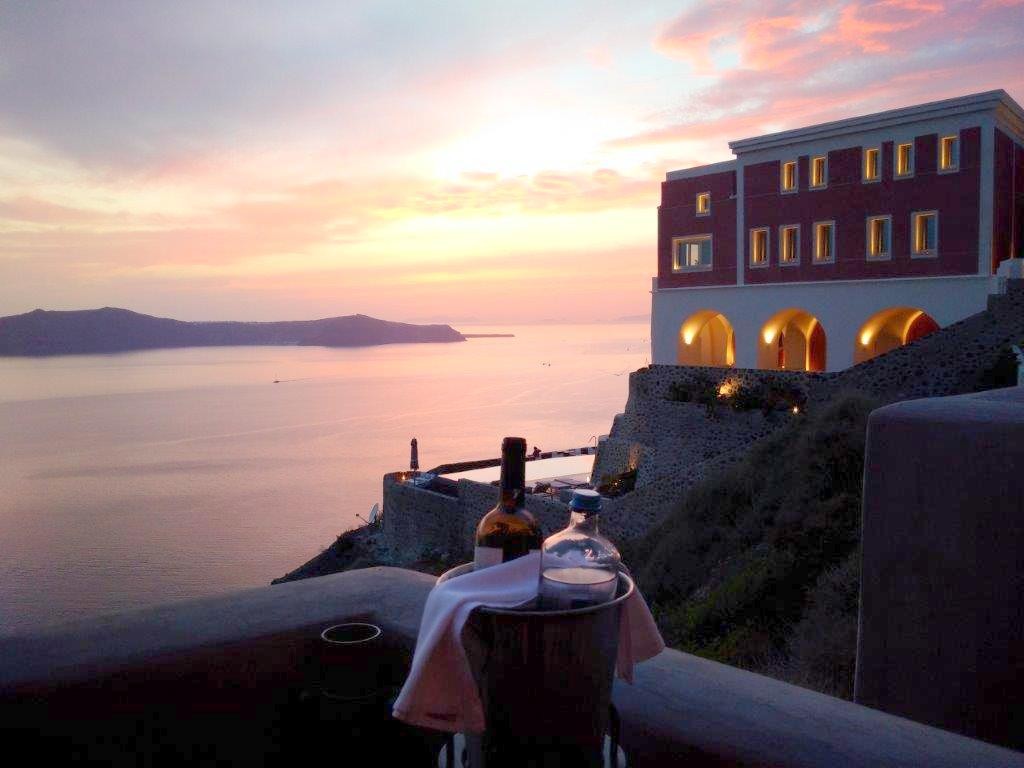 Leaving from London Gatwick, (Easyjet flies direct from the UK at a very civilised hour) the plane was full of hen-parties, honeymooners, brides, mother-of the brides, wedding planners  and wedding photographers. If you want to get married on Santorini, or honeymoon there, the Rock is honeycombed with white tulle draped accommodation. The trick is to find something that doesn’t look like a 1980’s bridesmaid’s dress, down the cleavage of which neighbouring parties are constantly peering, as, like some of the brides,  the famous parts of Santorini are definitely overbuilt…

High winds meant that our flight had to abort its evening landing, with violent lurches and rolls and a sudden up-thrust of engines, which had all the brides screaming and holding onto their grooms,  and we flew on to nearby Crete, where we were decanted into the hell-hole that is Iraklion airport, the kind of airport that has loo-paper strewn all over the floor and miss-signed gates with hopeless heaps of people going to Manchester trying to board the flight to Rostov, while bewildered Russians tried to do the reverse, saying “Vy are you not able to fix the sign? Even in Russia ve can fix signs.” The brides looked tearful, as indeed even we non-brides did at the prospect of having to stay the night here, but eventually we were able to rejoin our Easyjet plane, which by now had taken on the dimensions of a five star resort. Ross, the fabulous steward who had kept up spirits with a peerless, stand-up comedy routine gave a final seat belt check for the 3rd time, saying to my photographer neighbour, “Come on Sarah, love, fasten your seat belt, goodness me you should know the drill, you have been on this plane long enough.” The pilot, with great British Bulldog heroics, ( an Italian, Swiss and Spanish flight all gave up and flew home, and I hate to think of the Mediterranean bridal and Mother-of-the -bride tantrums on those flights,)  landed us all at Santorini, where brides, grooms, mothers, maids of honour and wedding dresses were all re-united. The customs police had long since gone to bed, so had to be roused and brought back to work. One sleepy chap arrived, viewed the tired hordes waiting for him, and said with that real Greek brilliance for improvisation;

“All people with crying babies – go through quickly now.” It should have been followed by  “All crying brides go through next” but he didn’t dare, and it was “All Europeans go through now.” We had an American in our group, so sadly had to wait till all the crying babies, brides and Europeans had gone through, at which point he realised he had lost his rubber stamp and had to go off and find one. By two in the morning, we eventually got to our real five star resort for the first evening, which was the blissful Vedema Resort in the village of Megalochori, which along with Pyrgos, is  the last remaining outpost of authenticity on the island.

Sacrificing the iconic sunset views, it reposes in peaceful gardens scented with honeysuckle and jasmine, with an elegant restaurant, the “Alati” in an atmospheric converted stone warehouse,  wine tastings in its eighteenth century wine cellar, two pools and a picturesque village with blue domed church outside. The historical mansion that comprises the main building gives one a glimpse of old Santorini and the Presidential Suite is where to stay here. 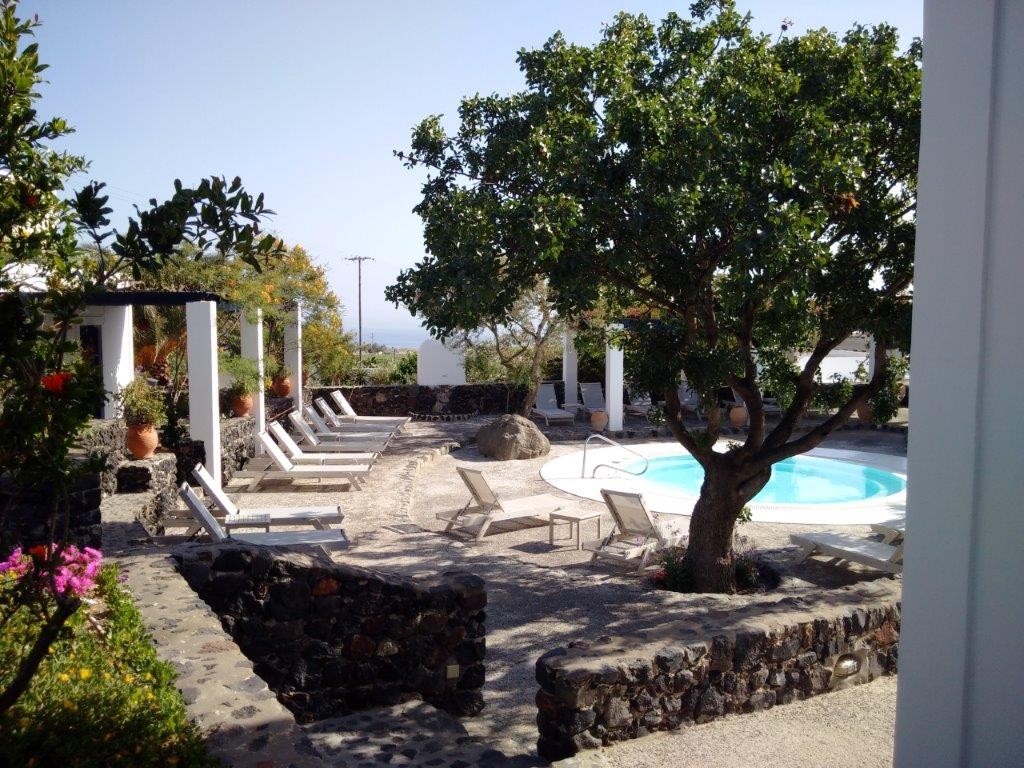 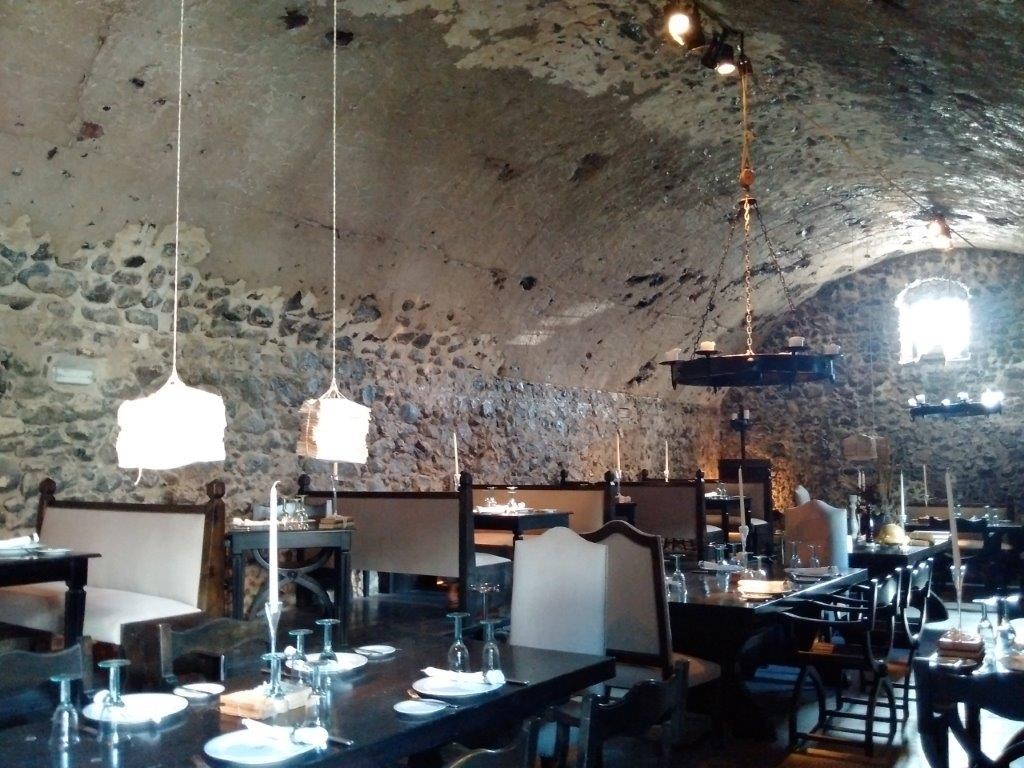 The village of Megalochori has, surprisingly,  one of the finest restaurants on the island, though it faces some stiff competition from the ones of Fira and Oia.  From the outside Veggera looks like a normal taverna, with rows of crooked flowerpots, the requisite number of cats sleeping on sunny steps, a broom leaning in the corner, a rather wonky terrace and a huge bougainvilleia   threatening to swallow up the entire place, cats, broom and all. All that changes once you see the menu, and the first amuse-bouche is placed in front of you delicately scented with basil and something else that my daughter insisted was jasmine. Fragrant meatballs with orange zest and a lightly spiced foam, the airiest of tomato fritters, and savoury cheesecake led the parade of mezze, and we barely made it through to the puddings. I asked to say hello to the chef, Nikos Koukouvas, but was told he was not there and our fabulous meal had been cooked by the sous-chef whose surname no-one seemed to know. The blushing sous-chef turned out to be a boy who looked about 12 years old, Fotis Tsato, remember his name. 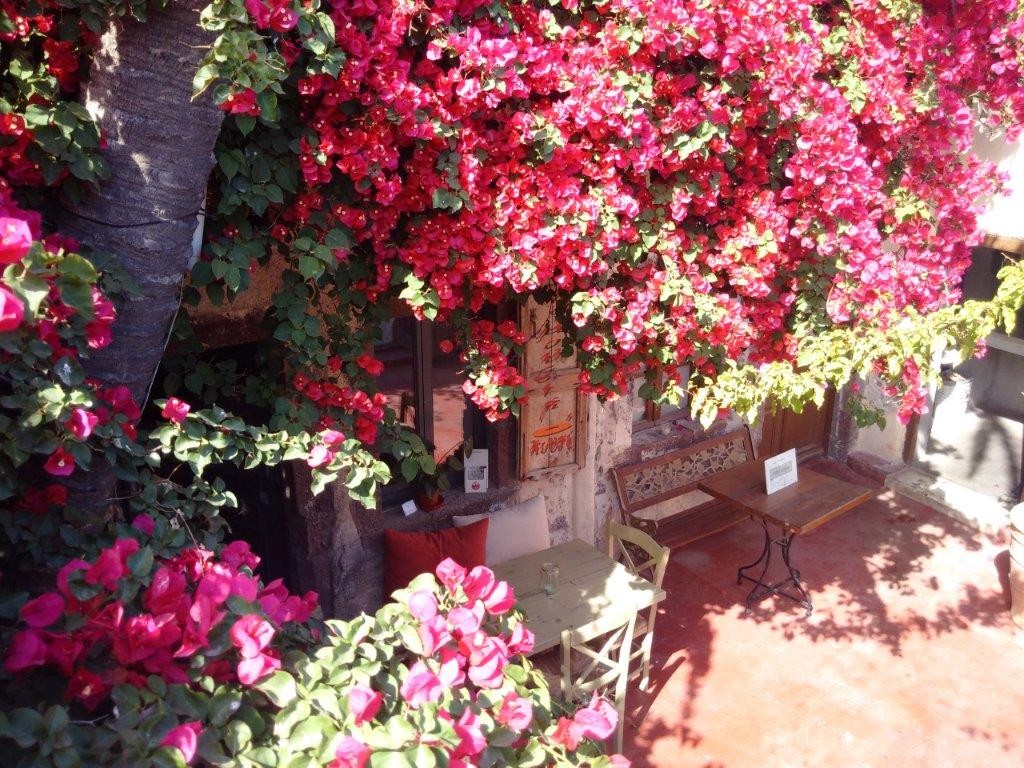 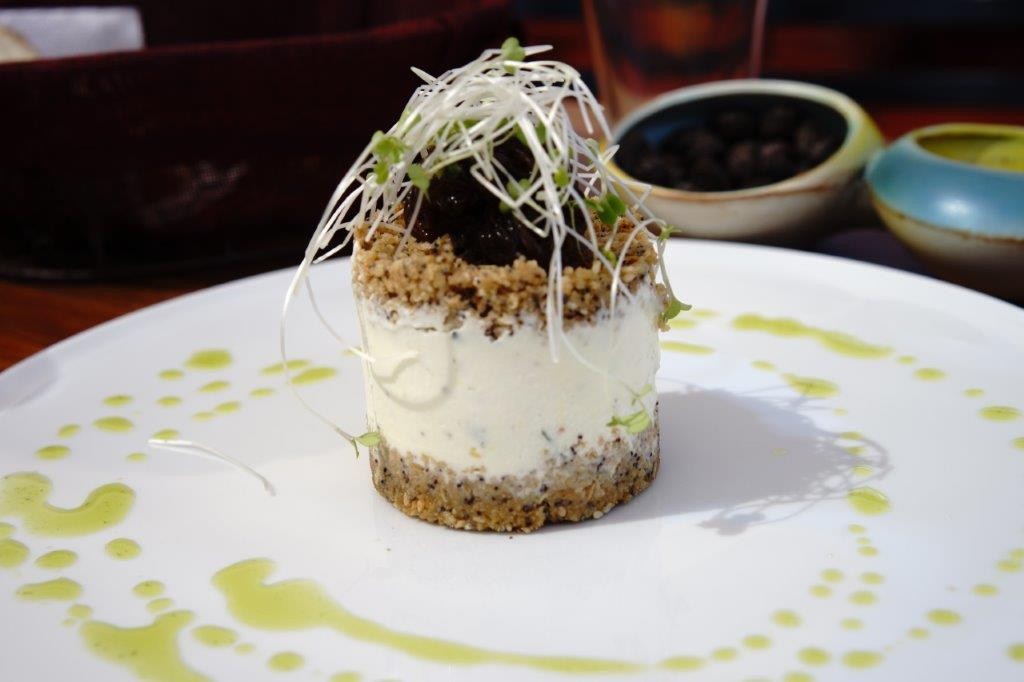 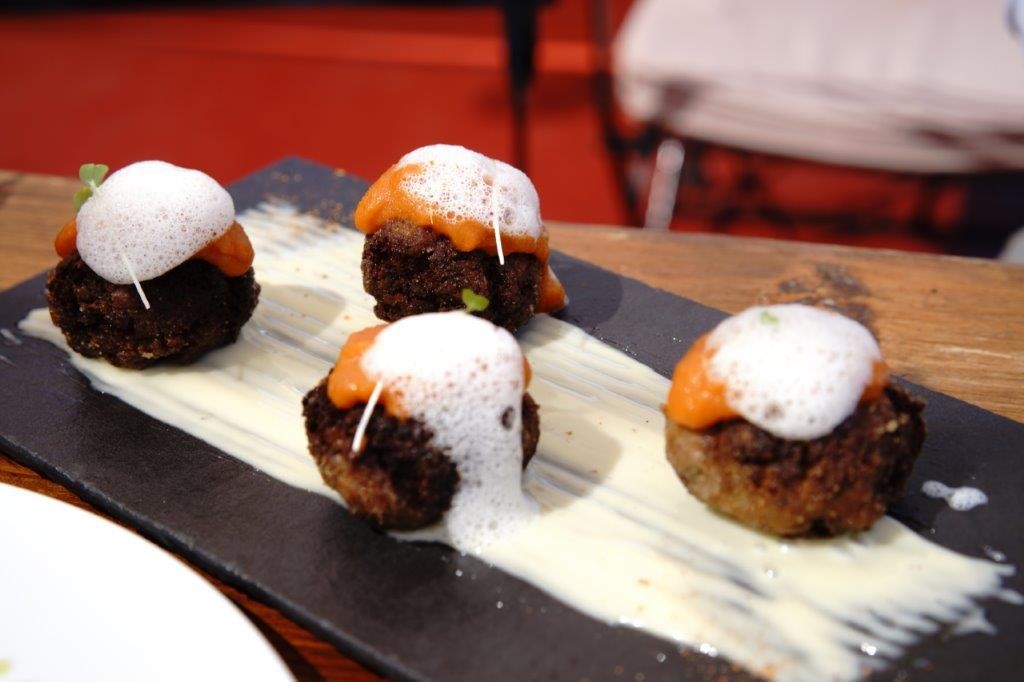 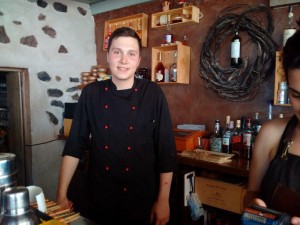 Another new opening  in nearby Pyrgos  is Botargo, a cute new seafood restaurant, so people staying that end of the island really don’t have to battle through the crowds to get up to Fira or Oia to eat well any more.

If you do go to Fira though,  Mr E, (Myster-ee, geddit?) is a cool new restaurant  with iconic views and excellent food. It had only been open for  three days, but a light-as- air black lava bread studded with orange Santorini tomatoes and olives, fabulous things done with vegetables, and divine desserts promise it a place on the Santorini scene. Book now.

The setting was so perfect and the food so good, that I thought this might do the trick as far as my daughter and the Boyfriend were concerned, but I think they ate too much, and my daughter was too busy taking photos other couples and of the sunset to get romantic… 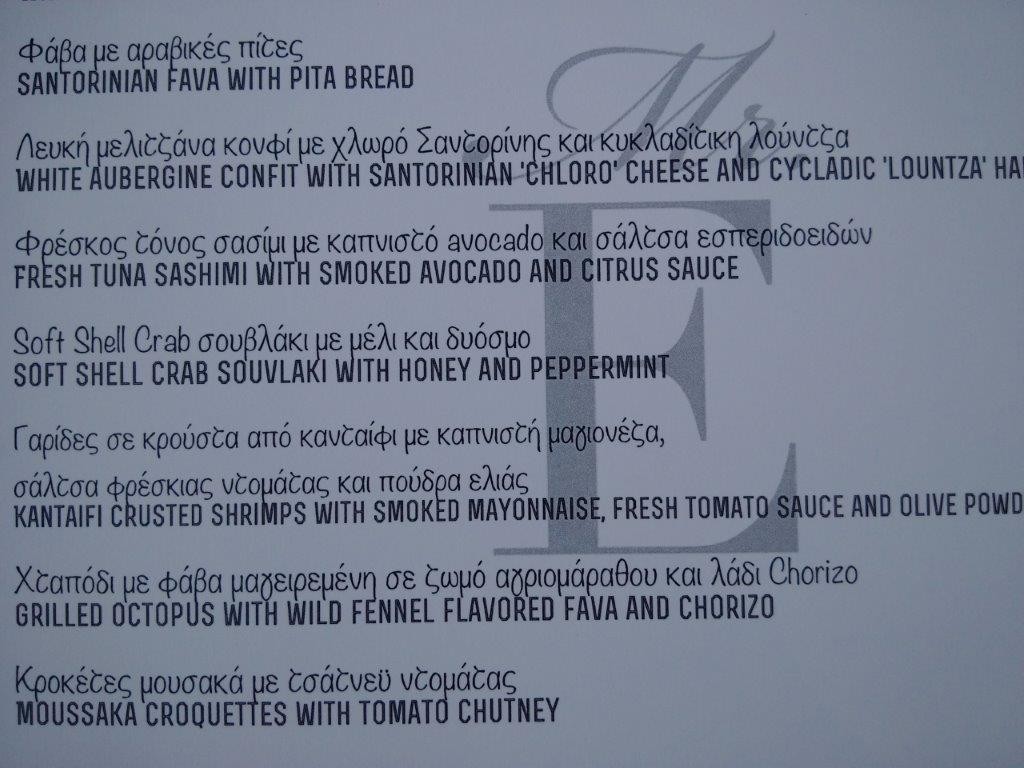 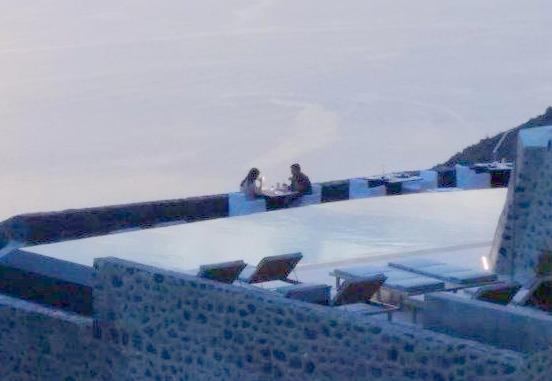 A couple- not the Daughter and Boyfriend, probably getting engaged…

The most elegant beach to chill at, once you have seen the Red Beach and the Black Beach, is Perissa, the far end of the long sandy bay of Perivolas. Not Mykonos or Ibiza, but great for a quiet time and for children. 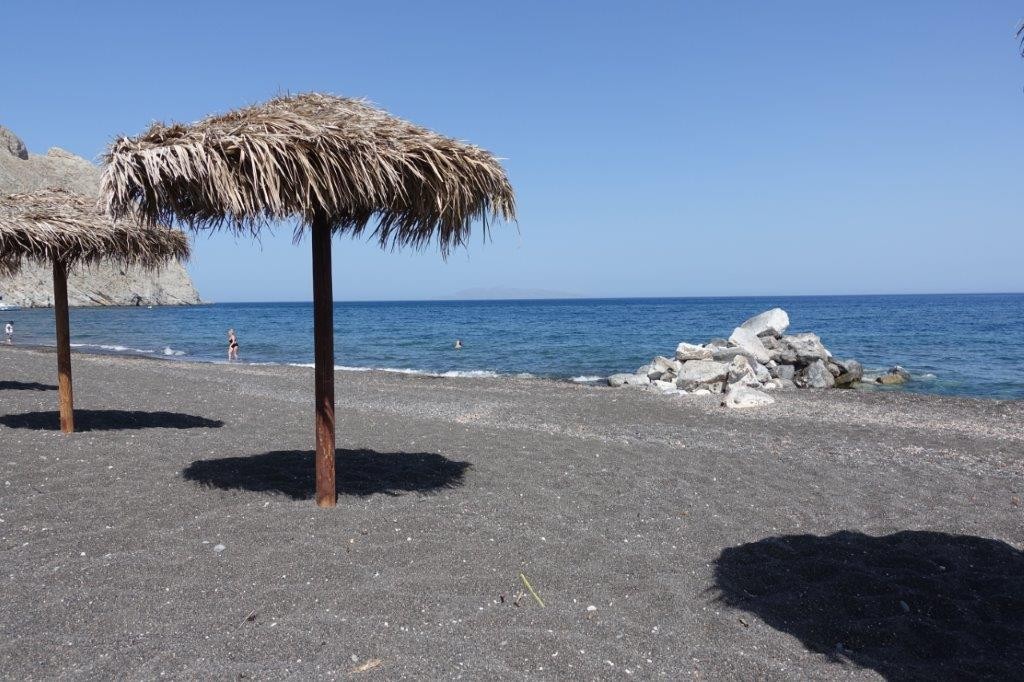 Our first visit the next day was on the Caldera-view side of Megalochori –  a magnificent new villa of 5 suites set in very stylish and glamorous terraces, all designed by Paola Navone who is a friend of the owner and has done a fabulous job.  The property is luxuriously furnished with all the toys: firepit, outdoor  movie screen, steam room, chapel, wine cellar,  driver, massage room,  hamam, day beds, giant bean bags, and a split level pool within the lower part of which a cave has been hollowed out, and within which a swing dangles in a flirtatious way.  Every suite has a private courtyard and Jacuzzi  behind it, but the front, facing the sea and the Caldera islands is where it all happens. Everything is included  – wine tastings, spa, sunset lagoon cruises,   excursions, great cuisine – everything except for foreign alcohol, and all this means that the first guests booked in this year have obediently reached for their fattest wallets without a murmur. This sort of villa has not existed on Santorini before, so it is breaking new ground. 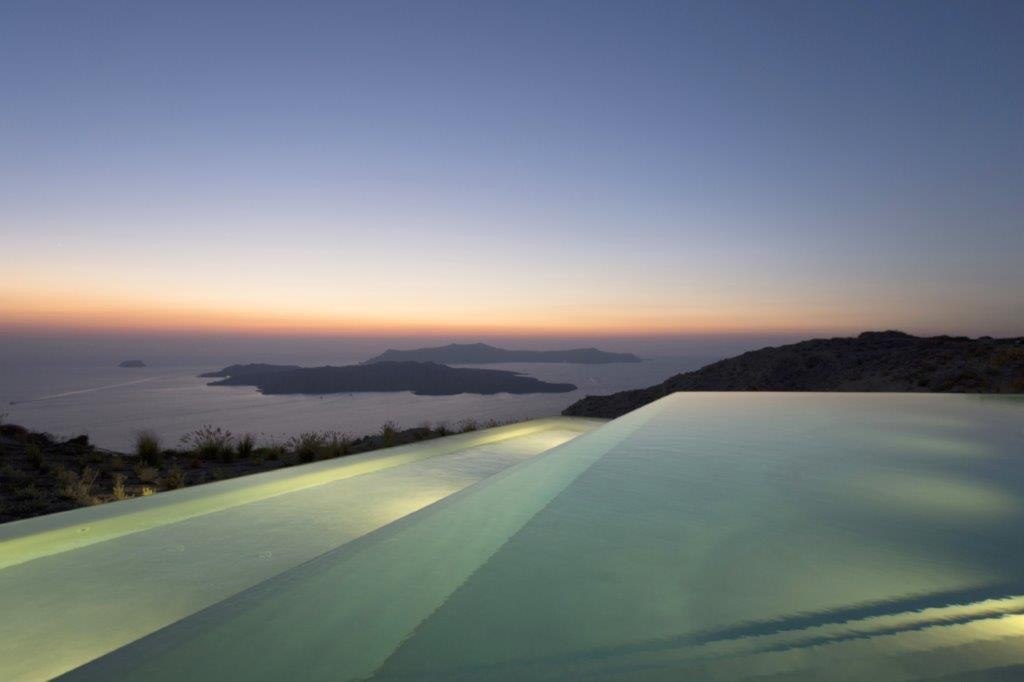 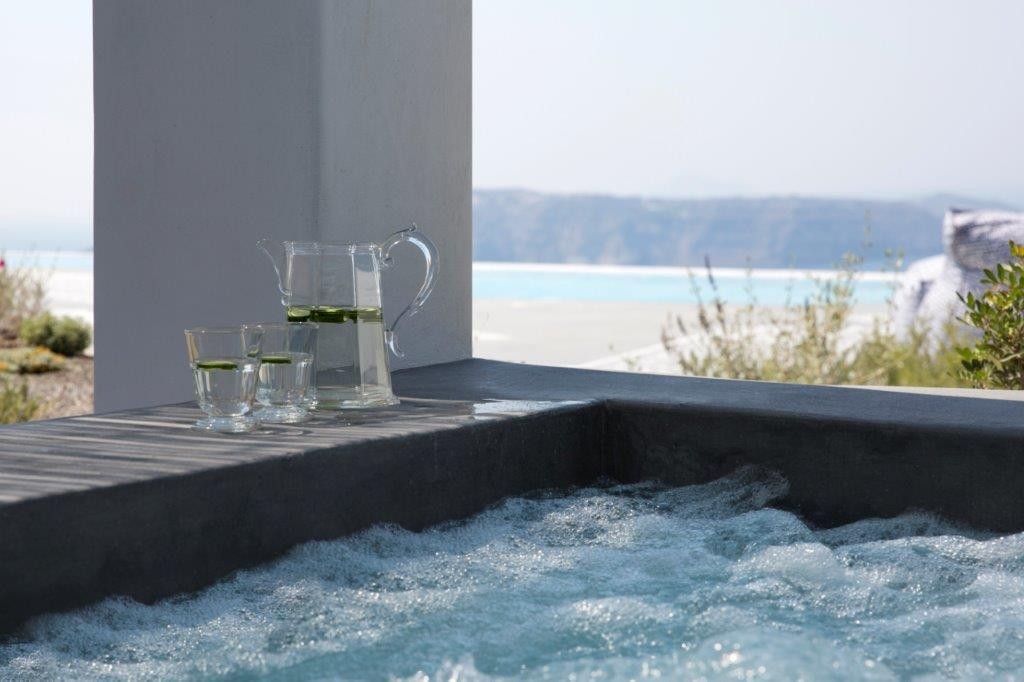 The next of the trio of new villas we looked at was a more classic beauty, less funk but more spacious rooms, the largest private terrace on Santorini, and  the same privacy and tranquil surroundings.   We were blessed with a spectacular sunset that striped the low lying clouds with bands of flame. A gorge drops down below the house to the sea. Unique. What we loved about these two  villas is that they are  the only upscale places on the Caldera where you are truly private, which is priceless. Dinner was down at Ammoudi, the little port beneath Oia which is ridiculously picturesque  and lined with fishing boats, twinkling lights and fish tavernas.  Lambro’s  is high on cheese – Zorba the Greek was being played in a loop till we begged the waiter to out the poor man out of his misery with a bullet to the head – but Zorba was indestructible and kept resurrecting. The fish is the best on the island though, so all was forgiven. A bride dropped her phone in the sea by mistake, and her gallant bridegroom stripped off his shirt and dived into the sea to retrieve it. He received a round of applause, and Zorba the Greek was off again. I am sure that marriage will go very well. Fishing for the bride’s mobile phone.

The final  villa we saw is in the quiet, residential area of Imerovigli, which has views of Oia  and the caldera. Ideal for 2 couples with some teenagers, it has two great “iposkafoi” cave suites with a large pool, a Jacuzzi and spacious terrace, and some extra bedrooms below. It is great to see Santorini beginning to embrace the villa scene. Watch this space. 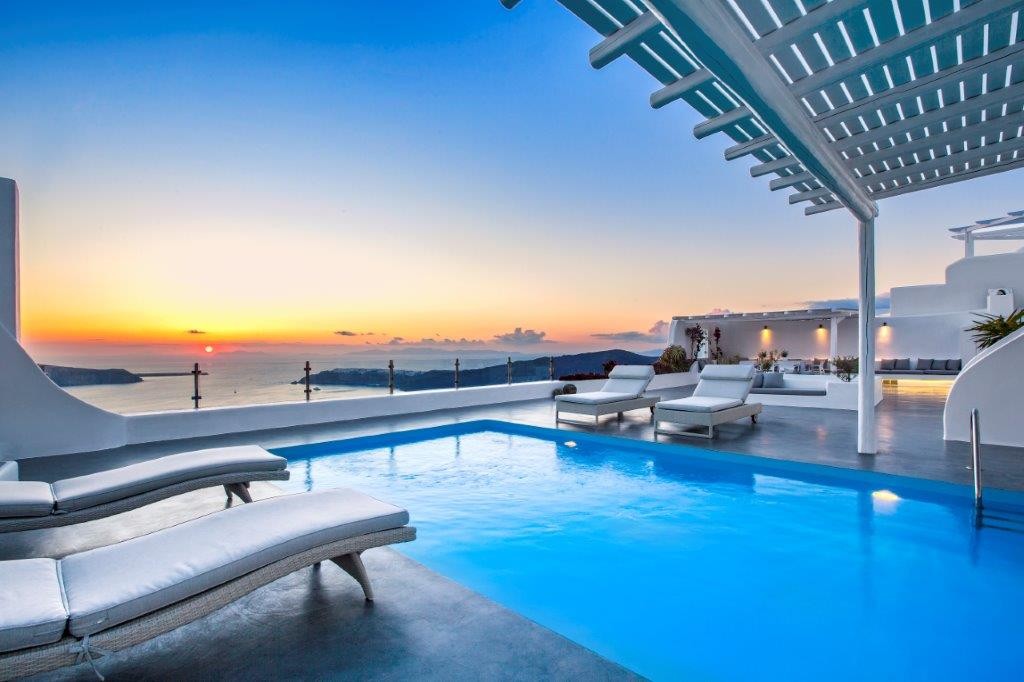 We took the Boyfriend to the airport that night, resolutely unengaged, but it was not the fault of Santorini.