On March 25, 1821,  Bishop Germanos of Patras raised the Greek flag at the Monastery of Agia Lavra in Peloponnese, and the Greek War of Independence from the Ottoman Empire was officially born. The battle cry “Freedom or Death” was taken up by thousands, and war was waged for 9 years (1821-1829) until a small part of modern Greece was finally liberated and declared an independent nation. 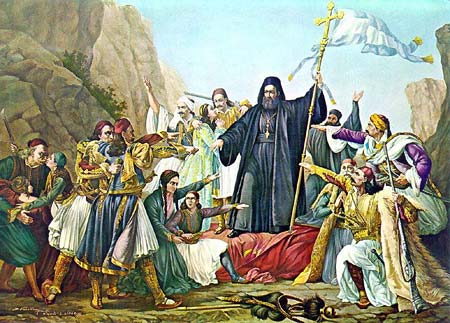 The struggle for the liberation of all the lands inhabited by Greeks continued. In 1864, the Ionian islands were added to Greece; in 1881 parts of Epirus and Thessaly. Crete, the islands of the Eastern Aegean and Macedonia were added in 1913 and Western Thrace in 1919. The last to become Greek were the Dodecanese islands.

Greek moustaches are sometimes set a-bristle by tub-thumping politicians in search of political distractions, but we now generally enjoy fraternal relations with the equally moustachio-ed but rather less bristly neighbours across the Aegean.

The Anglo-saxon world often doesn’t understand the fervour that abstract concepts engender in this corner of the Mediterranean, and indeed, why should they –  Anglo-saxon success is built on cool-headed pragmatism, not hot- headed idealism, as Napoleon recognised, rather  bitterly calling 19th century Britain “A nation of shop-keepers,” as he was carted off to the island of  Elba,  but across the Cretan Sea in North Africa the same words are being shouted. Maybe in 150 years, others too will be celebrating a 25th of March.

“We knew thee of old,
Oh, divinely restored,
By the lights of thine eyes,
And the light of thy Sword,
From the graves of our slain,
Shall thy valour prevail,
As we greet thee again-
Hail, Liberty! Hail! ”