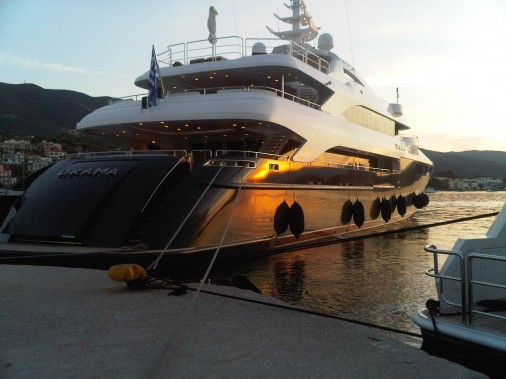 The hot little Saronic Gulf island of Poros does not have quite the same ring to it as Monte Carlo, and yet, with the 40 or so yachts lined up on the jetty, ranging from 50+metre super yachts with gleaming sides, forests of satellites and radars  above, deep pile white carpets below, mirror fronted TVS, convertible fly bridge roofs and garages full of jet-skis and toys,  to classic schooners of the 1920’s with original hulls and brasswork,  no wonder the cream of the International yacht broking community come from as far away as California to inspect the yachts and crews, test the mattresses and taste the menus (yes, the things we do for you…).

Little Poros in its picturesque fjord setting with neat neo-classical waterfront buildings, for a few days acquires the sort of glamour that most places can only dream about. 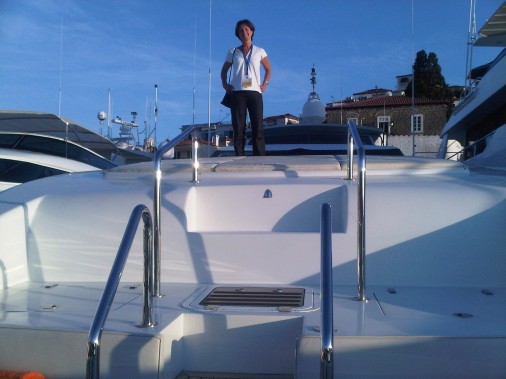 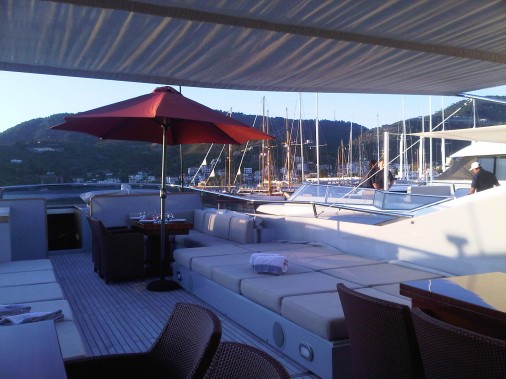 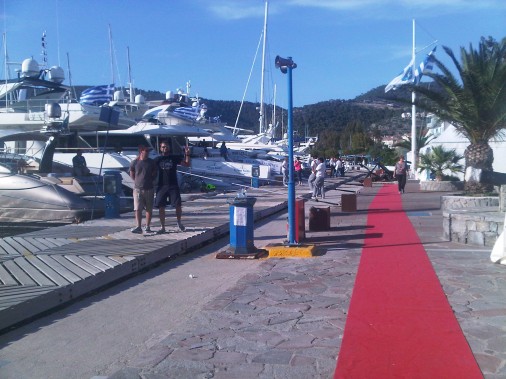 Red carpet laid out for visitors

The largest full moon of the year rose as the sunset faded over mirror-TV calm water, and the sounds of the various yacht parties to welcome the brokers floated over the bay. For two or three days, you go from yacht to yacht, becoming increasingly blasé about the wonders that you see, but unfailingly impressed with the courteous and attentive crews who show you round their impeccably maintained kingdoms. Wheel rooms resemble fighter jet cockpits more than anything else, bathrooms are show-cases of high tech innovation, (taps change colour to reflect the temperature of the water coming out of the spout) while out on deck, one is seized with a yearning to lie back on the cushions of the chill-areas and let the courteous and attentive crews off you sushi and strawberry caipirinhas.  My daughter is accompanying me of the first time on these trips, and has her mouth permanently hanging open in amazement.

I ran into my old friend Daphne who manages the largest yacht by far in Greek waters (82 metres) – the Queen of Jordan and P. Diddy have chartered it, and asked her where it was. “Piraeus, darling,” she said, “Brokers know where to find us.”

Now that is grand.

For those who want to see the islands cocooned in pure luxury, Greek based yachts can cater for classic elegance, funky futurism, total opulence, or minimalist design with a  zen vibe. What you see outside though will be Greece at its loveliest, and as the Yacht Show goody-bag T-shirts have emblazoned on them, “Greek Seas are not in Crisis! 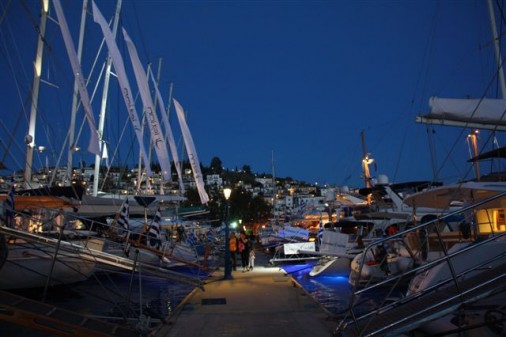 The sportier end of the market...

The only tricky moment came at the registration desk where I went to pick up my badge.  I had allowed myself to send a polite but critical email about the less than perfect yacht-show website performance – which I had copied to my cousin who is President of the Hellenic Shipping Chamber. As I registered, the girls at the desk told me “Please take a seat and wait for our chairman Mrs B. to speak to you.” “Oh dear,” I said, cravenly, “I am not sure I have time,”  and tried to make a quick escape.. But Mrs B. herself was marching towards me with a grim face.

I thought to pre-empt trouble by apologising in advance for any offence caused. She listened to my apology and then said, accusingly,

“I know who you are. You are Panos Gratsos’ daughter.” I couldn’t deny this, as he was indeed my father.

“Your father,”  (who was a well known play boy in his day and had three wives of which my mother was the last,)  “Your father left my aunt and cousin after 14 years of marriage, and ran off with your mother.”

There was a moment silence as we looked at eachother – I couldn’t deny this either,  as he had indeed,  so I apologised humbly for this as well,  swore silently at my father, and decided that I was not going to effect any changes to the administration of the Poros Yacht Show website this year.

Greece is indeed a small world, for better or worse, and I am really very well connected everywhere through a multitude of ways…. 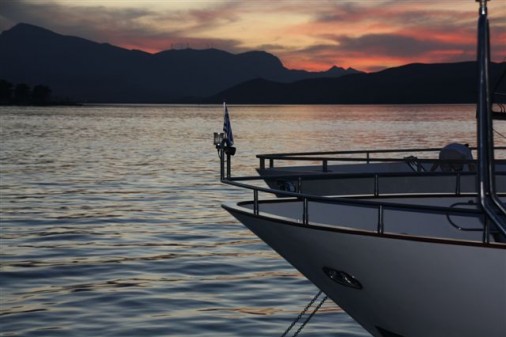