What to do in Sami – the cool, the underground and the secret. And Ryanair giving things away for free… 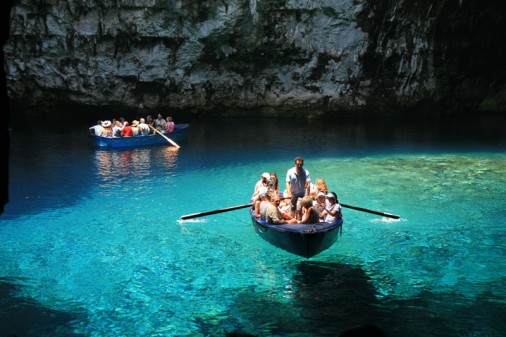 Wind-stranded in Sami, the pretty port of  western Kefalonia  – Babis the water taxi captain who looks like  a pirate out of Tintin, has said we have to wait for the sun to set and waves to subside, so 4 hours to kill   before meeting guests and going to the airport for Ryanair flight to London.

1. Taxi to the cave of Melissani – a half underground lake with  all the shades of blue and green  from loo-disinfectant  to cloudy jade. White doves fly above and eels slither through the water. The temperature is a refreshing 15 degrees cooler  than the furnace outside – natural air conditioning on a burning day.

2. The caves of Drogarati – a vast and deep chain of caverns hung about with stalagmites and stalagtites – just a few minutes further away and continues the theme of cool undergrounds…

3. Decide at the very last minute against taking the left turn to Antisamos beach, and turn right instead. The road winds up to a high plateau thickly studded with olive tees so old and grey and muscular that they look like a herd of petrified dinosaurs. Much of Captain Corelli’s Mandolin was filmed here. The road ends at the old Acropolis of Sami. No, I had never heard of it either despite killing time on Sami since I was a child..  The ruins of a Frankish castle on the opposite hilltop join up to the Acropolis hill with a snaking wall.  The broken walls and graceful doorway of a 16th century church  frame the entrance to the  ruins of the Ancient Greek square and the Roman baths –  they say St Paul preached here.

Scrape the gravel away in one field and a mosaic floor is uncovered – you are  supposed to cover it up again after you leave. I can’t think all that gravel-rubbing does the mosaics any good, but if truth be told, the magic of this place  is due to its almost complete neglect – the ruins and mosaics are not spectacular, but see how the pine tree splits a monolithic wall of stone blocks,  how a cypress tops a pile of columns, how no-one gives a toss other than to visit the little chapel on the site for wedding photos with the view of Sami spread out below. Much more exciting than a well known site with buses parked in a line and Souvenir stalls. 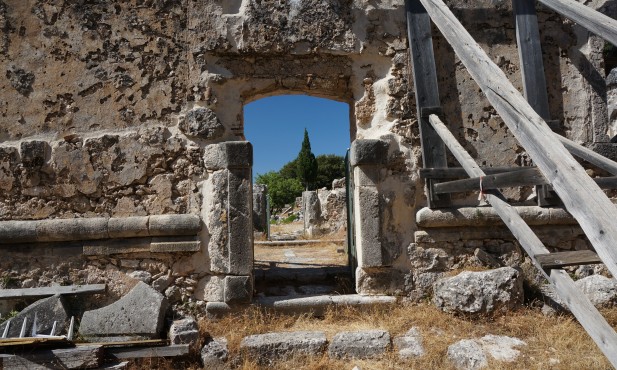 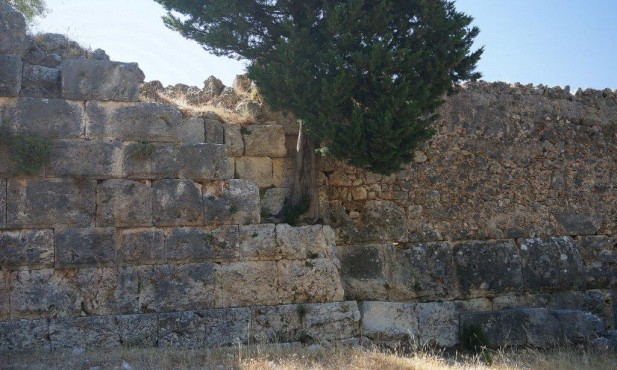 We spent  so long that we  were late to leave for the airport. Needn’t have worried – the Ryanair flight was an hour late,  for the most wonderful of reasons – On the flight out, a  drunken passenger  stole the stewardesses cash box, went up and down the aisle giving away money and lotto cards to all the passengers, and then locked himself in the loo. When they landed, the french pilot called the police and had him arrested. The fool.  Should have given him a medal.  I guess we all grew up with tales of  mutinous Saxons and Robin Hood, while Rouge-Gorge le Capuce never really caught on across the Channel…