I can’t help it – I  just love Flying Dolphins, those long tubular hydrofoils that skitter from island to island delivering packages, passengers and news  and  are a real life-line for the remoter islands. Patmos now has two, one from Samos and one from Kos, both islands with international airports, so  Patmos is much easier to get to than it used to be.

Kos was our starting point, where the 24 year old daughter and I had time for lunch in a little Turkish village,  and then a visit to the Asclepeion -a glorious setting of hills and cypress trees, framing the pale and sunbleached ruins of the ancient sanctuary of the god Asclepios. Columns lay around in the wild flowers, and water gushed from an old marble spout into stone basins that would have served the sick 2000 years ago as well,  who patiently waited for Asclepios to visit them in a dream and cure them of their ills.

Kalymnos, the sponge divers’ island, then Lipsis, then Leros lie on our Dolphin’s path. Tyhese are beautiful little islands with glorious waterfront villages, and a rash of tiny islets with crystal clear water in between them. 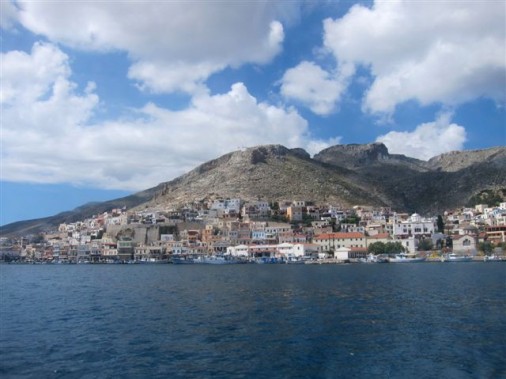 The Turkish coast (amazingly built up over the last few years) accompanies you on the right all the way,  and now and then the red crescent flag of a Turkish Gulet crosses paths with the blue and white of a Greek Kaiki, a reminder that just a mile or so across the water, the Mediterranean world ends. The ghosts of  Frankish princesses, Byzantine satraps, Knights Templar and  Genoese captains seem to cling to the castellated sea walls and hilltop fortresses of these Dodecanese islands, whose Neo-classical mansions with pastel colours and pretty tiled roofs are a different world from the whitewashed cubic villages of the Cyclades. 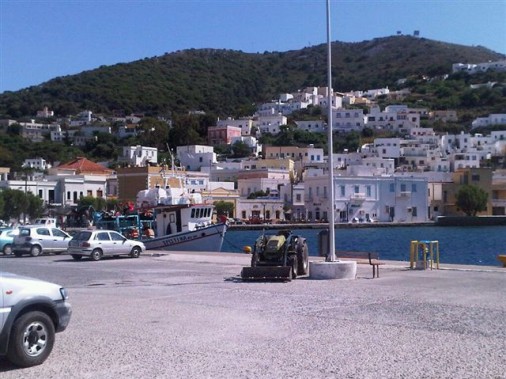 My reveries were interrupted by the appearance on the jetty of Leros of the best looking policeman I have ever seen. Here is a picture taken surreptitiously from inside the dolphin. 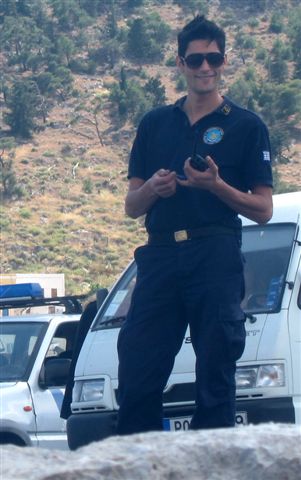 If my more intellectual musings don’t persuade you of the joy of Dolphin rides through the Dodecanese, then perhaps that will…. 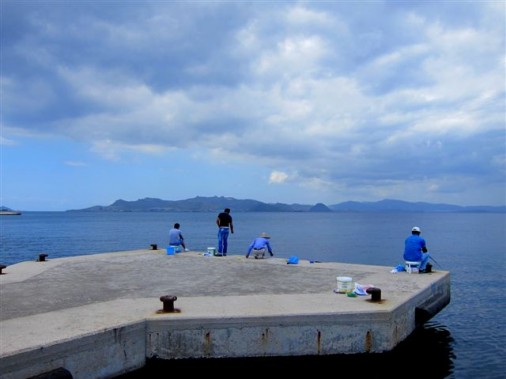