Barbarossa, Modern Pirates in the Aegean

If you’ve been hearing “Yarrrr, matey” lately, it’s probably because September 19th was International Talk like a Pirate Day.

TLAPD is a parodic holiday that started in Oregon, US as an inside joke between two friends in 1995, and has grown immensely in popularity in these past 20 years.

If you think an entire day of “shiver me timbers” sounds silly or easy, give it a chance me hearties, befor’ you be placin’ the black spot on the day! There are tons of resources online to help you with your quest such as the TLAPD’s Official British HQ.

The Pirates of the …?

However our fascination developed, one thing’s for sure: our modern world loves its pirates. Be it TV show Black Sails, now in its third season and sweeping up awards left and right, or the ever-lucrative films starring Johnny Depp, Keira Knightley, Orlando Bloom, Geoffrey Rush… talk about a box-office cast. Yes, we all know Pirates of the Caribbean, but what about the Pirates of the Aegean? 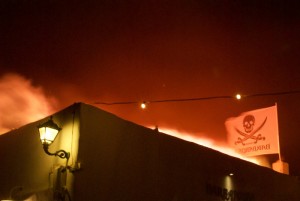 The Mediterranean Sea was home to countless pirate fleets, who found safe refuge in the thousands of little coves lacing the myriad of islands, from as early on in history as the Late Bronze Age (1550 BC).

Piracy flourished in the deep blue waters of the Aegean for so long, that pirates went from being a source of constant disagreement and rivalry between the ancient cities of Athens and Sparta, to playing an integral part in the 1821 Greek War of Independence against the Ottoman Empire.

Though these brigands are often referred to as a plague on the seas, historians argue that piracy profoundly influenced the course of Aegean history, including the culture, economic progress, and architecture of the communities. 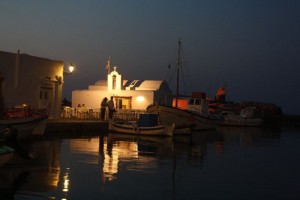 Crete was a haven for pirates from the very beginning, with countless spots they could hide away in or attack the land from. Aegina was the infamous island where pirates knew they could offload stolen goods or slaves for a decent profit, whereas Milos and Serifos with their soil rich in ore, were almost constantly under heavy attack from these seafarers.

“Terror of the Seas” Barbarossa, & His Claim on Paros

The cosmopolitan fishing island of Paros, now a favourite destination for a luxury holiday, was the island that one of the most notorious and feared captains chose to make his own, capturing it in 1537.

The red-bearded Captain Barbarossa, hence the name, was originally a sea-merchant from Lesvos who began his pirate life by raiding the Aegean with his brother Oruç, who later claimed the title of Sultan of Algiers for three years. Following his brother’s assassination, Barbarossa succeeded him and quickly fell under the command of the Ottoman Sultan Selim I, becoming a bona fide corsair raging through the seas and raiding Spanish and Italian vessels, earning himself the pet name “Terror of the Seas”. 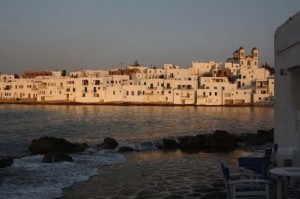 Though the Aegean no longer harbours law-less plunderers of the sort, you can re-live some highlights during your vacations in Greece at the annual Barbarossa Corsair Festival on the island of Paros. The island began the one-day re-enactment festival in the mid ‘60s in an effort to stimulate tourism, and this year celebrated the festival’s 50 years with two glorious days of swashbuckling and revelry during the 22nd and 23rd of August. 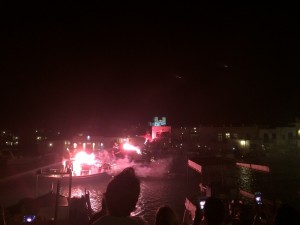 The Celebration of a Frightful Night

The festival’s re-enactment is of a horrific night when pirates stormed the village and slaughtered over 600 islanders overnight. Though it might seem a peculiar thing to celebrate, the villagers triumphantly fight back at the end of the re-enactments, ending the night with a huge feast. 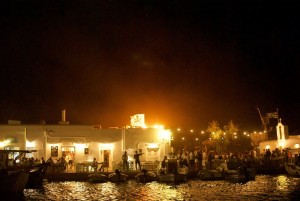 The young people of the island, aged 20-30, play the biggest part in the event with young women dressing up as the village’s damsels in distress, and young men getting into little boats around 7oclock in the afternoon, to sail over to Monastiri beach just across from Naoussa.

Hidden from the islanders, the men dress up as Corsairs and start preparing their fireworks for the attack, all the while fueling up with local tsipouro. When night-time comes, the fearless pirates attack the port, “setting fire” to the castle, and with church bells ringing in the background, islanders pour out into the streets in an attempt to escape the privateers. 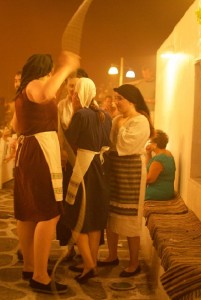 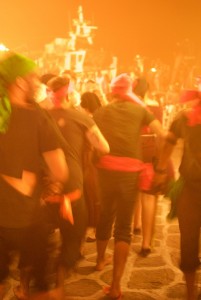 Why You Shouldn’t Miss It

A folk festival of piracy and history, Barbarossa Corsair is a wonderfully vivid experience for tourists and locals alike, with the whole of Naoussa joining in and sailing under the black. There is free fish and wine available in the streets, and a multitude of activities to keep everyone thoroughly entertained with games and lessons in traditional dancing, exhibitions and tours, and of course, nights of revelry! 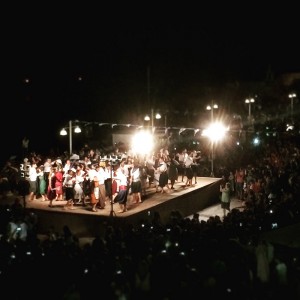 Since we have an inside man, we can share with you a little secret; if you happen to get ‘carried away’ with the Corsairs, you might get a couple more free drinks from bars as the owners tend to take care of the festival’s pirates.

Free ouzo, anyone? Of course, you didn’t hear that from us…

A Suggestion for the Seafarers

Besides the comfort in knowing you can go back to your luxury villa at the end of this faux-thriller evening, it might also be interesting to view things from a distance on one of the nights.

Whether your accommodation has a view of Naoussa’s port or not, we can procure the perfect luxury vessel for you to sail the Greek islands and experience the festivities from your very own ‘pirate’ ship, leaving the port to the landlubbers. 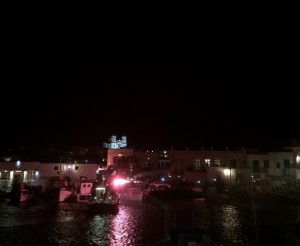 Take a virtual trip to the island of Paros, or find more information on the official webpage of the Festival, which also offers a promotional video.