Corfu finale – My Animals & other Family 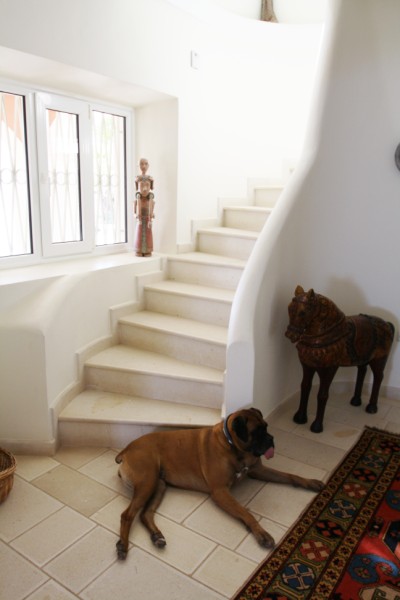 My villa tour continued, with an animal theme; Villa SK, just above a secluded cove up the coast from Avlaki, has an elderly bull-mastiff called Abi, She is doted on by Anna, the laughing girl who looks after the house, and is taken for a swim on the beach every morning. Abi has got it figured out – a shady garden, private beach, lovely staff, and a large choice of comfy, squashy veranda furniture to choose from. I suspect she sleeps in one of the cool, airy bedrooms with blowing muslin curtains when the occasion arises.

Villa NM on the other hand, belongs to Millie, a rescue dog, and her friend, a sort of collie-type affair. Millie has a hard time patrolling this estate which is large, wild and long and slopes down to the sea. We drove down to the private jetty by Land- rover, and Millie ran ahead. She then led the way to a folly built at the top of the hill from where there is a 360 degree panorama of this very unspoiled bit of Corfu, and escorted us down for tea on the long, shady veranda, from where we had a lovely view of the sailing boats beating down the straits between Corfu and Albania – the Brindisi-Corfu race was on, so some serious quantities of sail to be seen. Millie took her duties too far as half way back to the main road we discovered she was still running behind our car, so we had to pull her in, sit her on our laps and drive her home. The things a girl has to do to finally be allowed in a car, she seemed to say to us, and then after all that to be taken straight home again….
But Millie has a wonderful couple who look after the house and grounds and pool, a couple of acres of waterfront to run around in, and perfect peace and quiet, so she hasn’t really go anything to complain about. The reproachful look of a Colditz escapee being returned to camp was entirely unjustified. 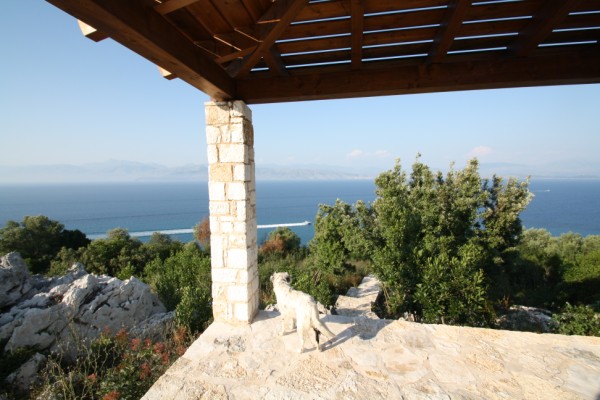 I popped in to say goodby to the owner of the Bellamare hotel in Kassiopi which I have been using as a meeting point. (Highly recommended for those on a small budget wanting somewhere genuinely hospitable and brilliantly located on the beach). We discovered that we were both Greeks with German husbands, so bonded like mad –
“ I have had mine for 42 years” she said, “And the last 20 years have been much easier than the first 20.”  Which has to be good news….