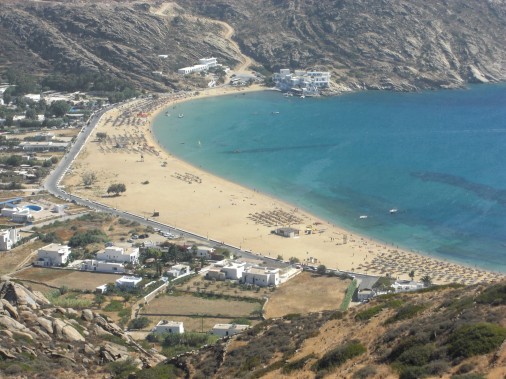 Like a young girl who misbehaved when she was 17 and has been given funny looks and avoided ever since, Ios sits,  largely avoided by   “those who know”,  half way between Mykonos and Santorini, connected to both, but unvisited  and resigned to an unjust fate – The party scene on Milopotas beach which was Ios’ youthful indiscretion 10 years ago, and which has branded the island ever since as host  to a druggy/dirty hippy scene, is actually laughable  – a kilometre long beach of wide golden sand, which does get very full in summer, as all Greek beaches do,  a modest, single width strip of  one storey beach bars,   pizzerias, a children’s playground and some souvenir shops. I really didn’t know what to say. Pathetic was the only word I could think of- but I didn’t want to offend the guy who was showing me around.

“Ooooh my, that looks wild” I said, finally, thinking of the madhouses to the left and right on Mykonos and Santorini.  “So what goes on on the rest of the island?”

“What do you mean nothing?”

The port of Ios is a small affair with  pretty waterfront, the church of Aghia Anna whose saint day it happened to be,  so all the bunting was up,  and  some excellent waterfront  tavernas which of course I tested for you. 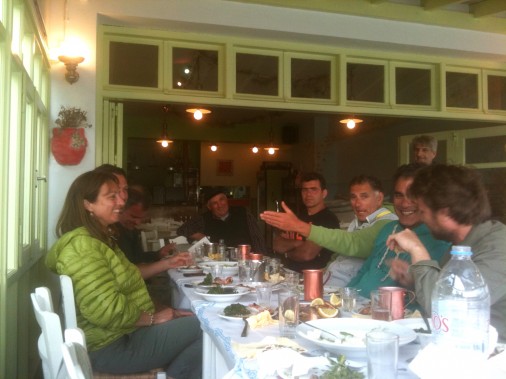 and I promised Kyrios Yannis to put a photo up of him as he had caught a truly excellent lobster for us. 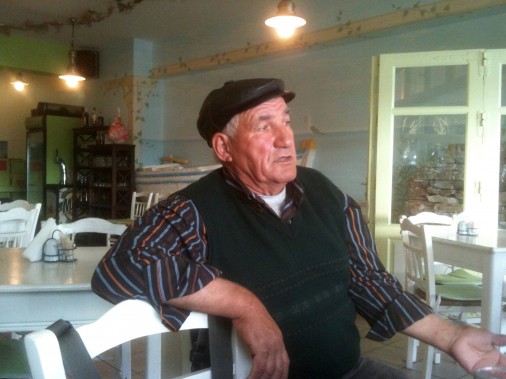 Ios Port also now has a new boutique hotel where I stayed called Angalia – the Embrace. A very successful Wall St trader/artist/visionary/possible lunatic  has built to his exact design and specifications  an art hotel of 12 suites with a pool and thatched pergolas. His art and poems decorate the walls, his designs inform  every detail from door knobs to pool mosaics. It is worth the trip to Ios just to wallow in the bathrooms of Angalia. Works of art. 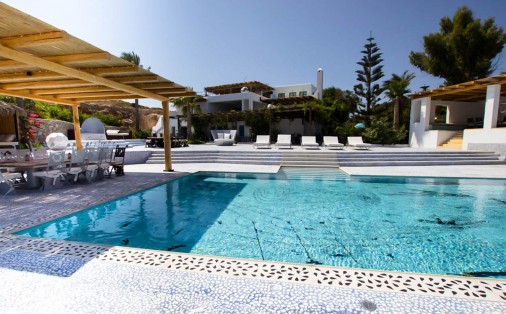 If you can tear yourself away from the acres of hand polished marble and resist the lure of Big Bad Milopotas, (ha ha,)  the port offers neat little white houses with flowers,  fishing boats,  a scenic road winding up to Chora, the hilltop village which is possibly one of the prettiest in the Cyclades. Tiny plateias shaded by  mulberry trees, excellent food, small blue domed churches,  local products,  windmills,  bars and pubs hidden in the twisting lanes, cushioned steps in alcoves, stumpy-legged old ladies in black chatting to the priest from one of the domed churches in the village –  The crystallisation of the Cyclades. 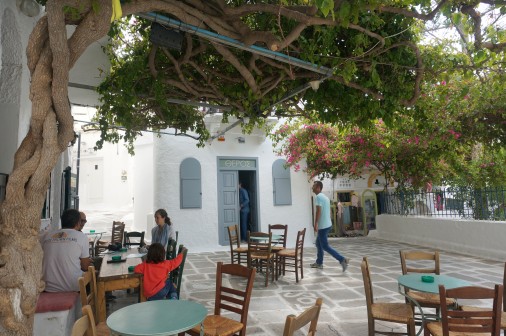 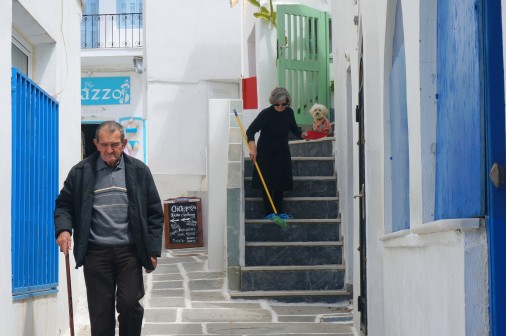 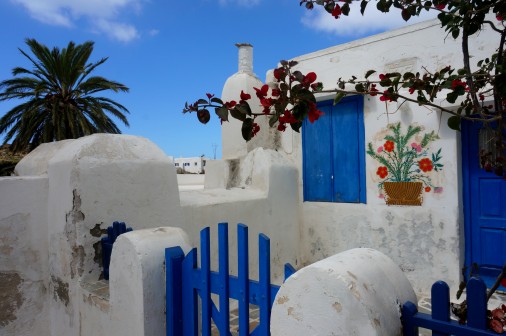 Outside of the harbour and Chora and  Big Bad Milopotas,  there is indeed nothing – unless you count the astonishing number of huge sandy beaches, reached mainly by rough tracks, the stone walls snaking around the hills, the amazing  rock formations, the tiny fishing village of Manganari,  the shepherds with their flocks of bell-festooned goats cling-clanging their way around the stony fields, and the dry wind smelling of oregano and goat,  sweeping over the  mountains from where you can see  all the surrounding islands spread out in front – Naxos, Amorgos, Folegandros, Santorini… 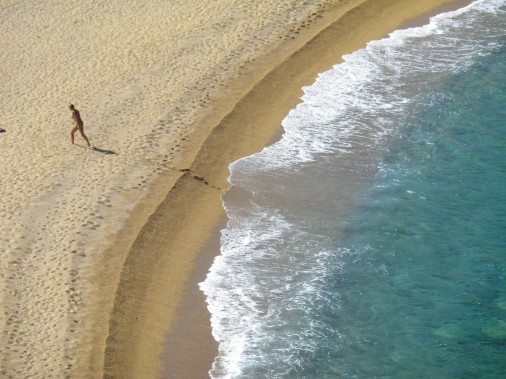 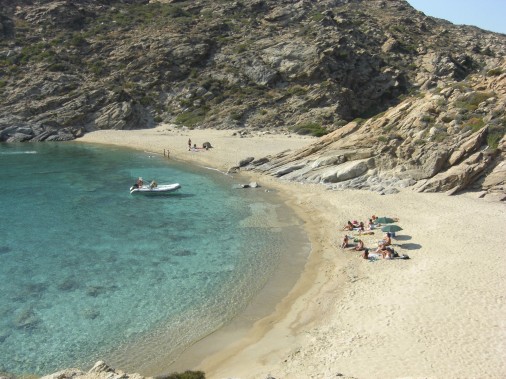 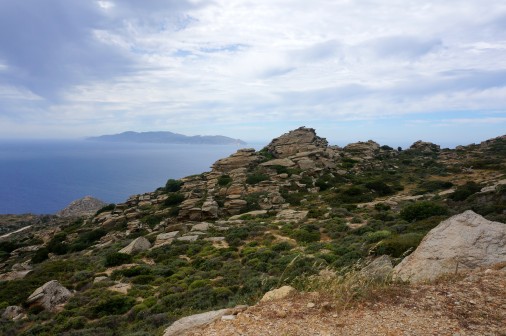 Shepherd opening a gate for traffic from the Coast...

The owner of Angalia who has a significant amount of beach property on the island, had invited me to come and advise on how to make Ios an exclusive villa destination – a list of negatives funnily enough is really all that is needed when an island is that pristine “Don’t spoil it, don’t  overbuild, don’t impose.”   If in the next few years we can offer you some wonderful villas on Ios,  a stone’s throw from a huge sandy beach, this is where it started. Five Star Ios.

The owner  is also planning in the process of building  Pathos –  which means Passion – an extraordinary 50 room art hotel  and open- air cocktail lounge above Ios harbour with stone arches, alcoves and terraces, palm trees and pools.  With a basil, ouzo and pepper cocktail in hand, (see previous blog..) listening to chilled music as the sun sinks in front of you, the first guests here  in 2015 will wonder that it has taken so long for Ios to appear in public again – Perhaps this will be the start of lovely Ios’ rehabilitation – She deserves it – who gets judged on a youthful indiscretion?

For the full gallery of my inspired photography check out our Island Guide on the  website. Sadly, I dropped some taramosalata on my camera lens during  lunch so all pictures here are pre-prandial… Didn’t notice till I got to Santorini and wondered where the pink fog had come from….
Interested in renting a luxury villa or chartering a yacht in Ios? Please send us an enquiry