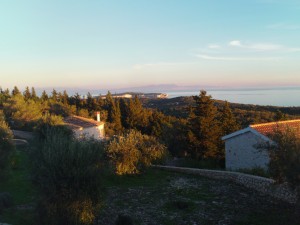 The car rental man will never understand how we managed to clock up 250 kilometres on an island that measures 8 by 3km. I don’t think we will tell him either… Paxos only really needs one road, so the figure of 8 arrangement that they have put in the middle of the island for some reason, is just put there to confuse a girl. It took us 1 hour and 15 minutes to find our little villa which is 3.5 kilometres from the port. At Taka Taka, one of the best tavernas in Gaios, as we paid the bill to leave after a restorative drink and dinner, we told the taverna owner how long it had taken us to get to our house, “Ah yes” she said smiling sympathetically, “If you walk very slowly it would take you that long.” “No,” we said, “You don’t understand, we had a car.”

We got lost again going home, and were crying so many tears of laughter that even once we found the  villa, we drove into the wrong drive.

But we have a panoramic view south of sunrise, calm seas, sunset and full moon,  and some kind soul left us some Nutella. I do love my job.

Today we were woken up by gunshot as the Paxiot hunting season has started. The sun rose obediently in front of our terrace, the sky lightened to  blue, and  after a healthy breakfast of tea and white bread with Nutella and menthol cigarettes,  we set off again.  And what a day – we saw a  beautiful new-built villa on the cliffs above the turquoise west coast,  and a spectacular villa in the Mongonissi area;  an  Italian-designed minimal modern masterpiece, occupying an unfairly deserted prime piece of coast,   9 bedrooms, stone, linen and wood spaces flowing serenely in and out of the house and down to the sea.  Peace reigned and would  do so even in the frenzy of August. Exactly what we were looking for and where I would like to spend my summers.

Gaios is a contender for Greece’s Prettiest Village, (see previous blog)  which  is what we also said at Lakka in the north where we had a late lunch at Aki’s,  a sophisticated waterfront taverna with a chef from Florence.  I told Aki that I was very hungry, “So that would be salady things then would it?” he asked,  “Ladies like salady things.”  “ No,” I said, “Absolutely not salady things, nothing salady at all,” and ordered octopus and swordfish  carpaccio,  black risotto with cuttlefish and mussels,  zucchini and leek pie, taramosalata and delicate little crespelle with spinach and cheese. Not so little actually if I am being honest.  We couldn’t finish it of course, but I really can’t have taverna owners  going round assuming that I am a lady… 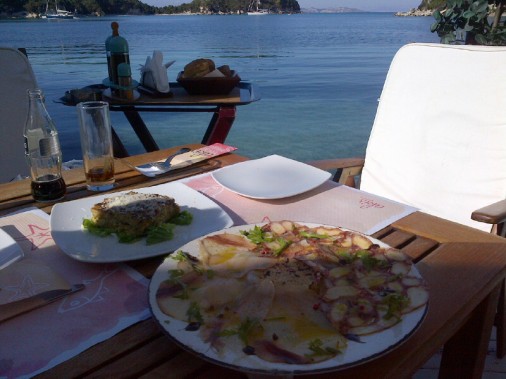 The taverna cat allowed us to toss bread in the water so that the fishes came, and  then spent an hour trying to fish them out with its paw.  We sat contentedly in the balmy October sunshine over Greek coffee and thought yet again that there really is nothing like a small Greek island in October. 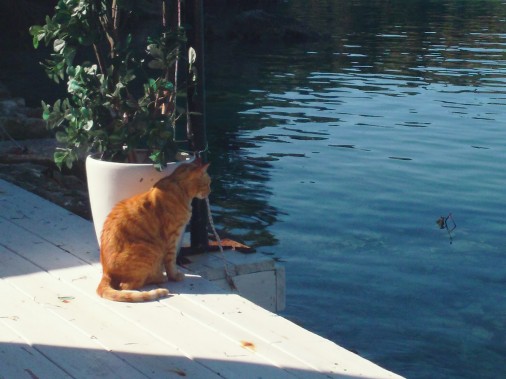 After  a tour of the island and getting only slightly lost again (25 minutes) we made it  back to our villa, and then cocktails in Gaios,  watching the full moon rise all orange from the sea in front while the yachts lay clinking masts in front of us.

We also thought that Loggos was a contender for Greece’s Prettiest Village –  As Jules, our Corfu person who is travelling with me on this bit of the trip is also a Libra, we are not only always going to get lost if left alone in a car,  but never going to be able to make up minds up about anything – so all three villages will be Greece’s Prettiest Village – plus Fiscardo on Kefalonia and Kioni on Ithaca of course, and Naoussa on Paros, and Symi…  Gaios has the best moonrise, but Lakka has the best food, and the world’s least talented cat at fishing, so has to be a winner… 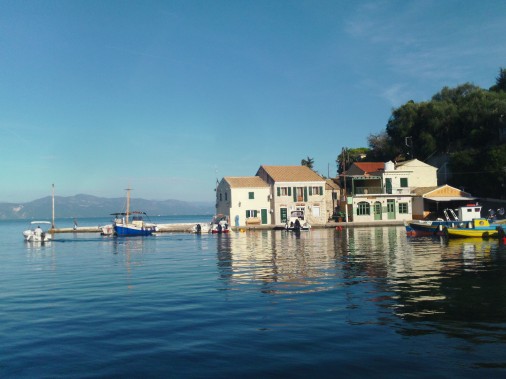 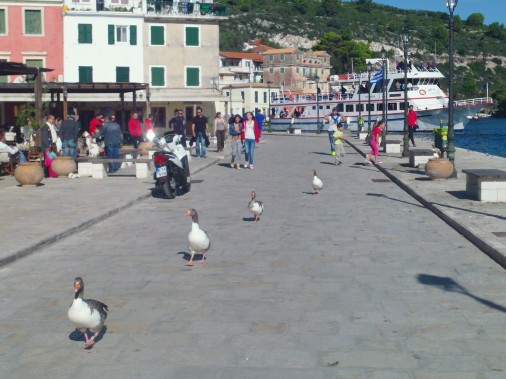 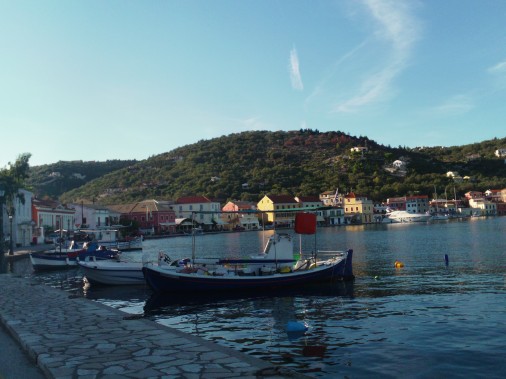 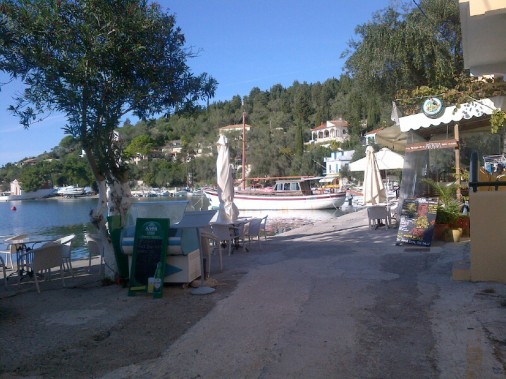