Greece is for Lovers

I am now age fifty- something, and for the first time ever, “cavorting” around Milos and  Serifos  on a villa inspection trip with a backpack and a man – my husband of 28 years. We are holding hands,  feeling twenty years old again, having romantic dinners in waterfront tavernas, wandering through little mazey villages, and looking for remote and isolated beaches.  I am not writing this thinking that my marital status is of any interest to anyone other than me, but to make the entirely serious point that small and simple Greek islands are for lovers of all ages. Yes, one looks better in tiny shorts and gold transfer tattoos at twenty, but we middle-agers fall back through a time warp, and return to our twenty-year old selves for a while. Our fifty-something year old selves might need to break for a shower, get irritated at sand in our shoes, fight over the air-conditioning level and  check blackberries too often, but these are mere details. Greece is for lovers of all ages.

Serifos is possibly my favorite small Cycladic island to be twenty years old on- or fifty something as well. It has a wild and rocky beauty, the tawny mountains pulse with light  and the azure sea merges with the sky  in a vast dome of empty blue. This is the island of Medusa, the monster with snake hair who turned to stone anyone who gazed at her; the island of Perseus who killed Medusa by using a polished bronze shield as  mirror and thus avoiding having to look at her; of Andromeda, rescued  by Perseus from the dragon.   Rock, bronze, snakes dragons and stone.  This is Serifos. The simplicity of the island is fiercely preserved by the locals who have seen off wind-farms and other intrusions, and see no reason to  provide paved roads down to every beach. The food is fresh, local and nothing special,  your credit card will not overheat,  although Coucoucherie up in Chora, the chic hill-top village has some fabulous beaded and fringed waistcoats for 1,000 euros.. and when Petros, the owner of the best grill taverna in Chora has had enough, he goes round the tables and says “Paidia, no use sitting there waiting,  I am not  making any more to eat now” And the guests obediently get up and go somewhere else. Brother Nektarios is the only monk left in the Monastery of Taxiarchos – (the Archangels.)  When he arrived as a young novice over 50 years ago, there were fifty monks in the cells, he has been alone for the last twenty years, but he is kept busy with his  goats and  bees, the pastoral visits around the  small villages, and his Sunday services rotated around the island. The monastery is closed after  2 pm. But as soon as Father Nektarios sees anyone, he pops up to show them the church, practice his Italian or Spanish, offer little cubes of sticky Turkish  Delight, and keep up with the times. 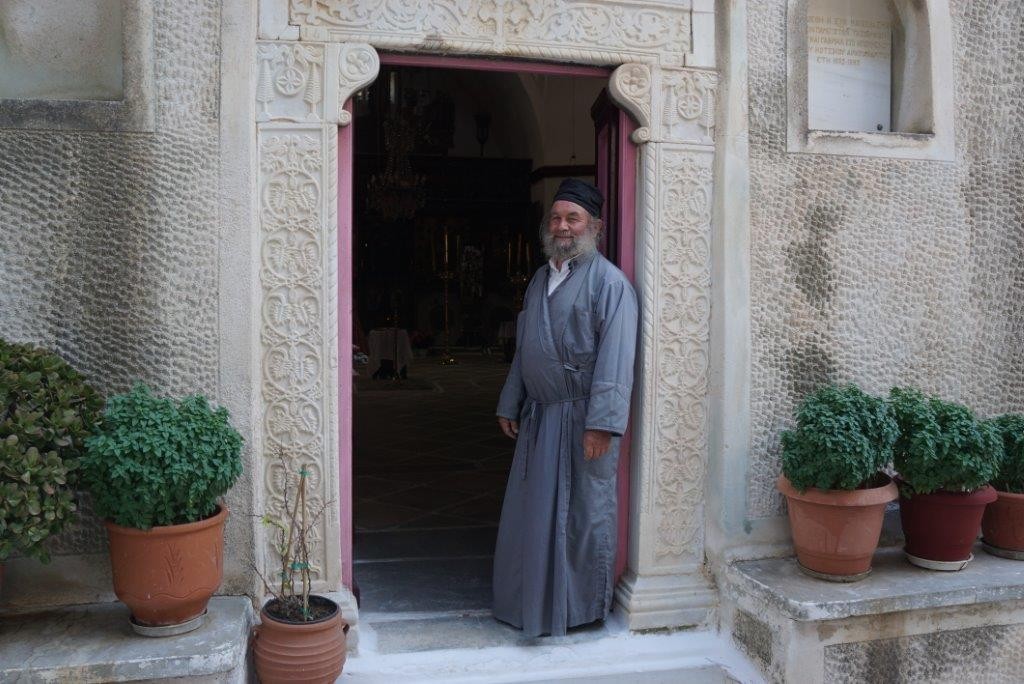 Psilli Ammos is an East-facing beach with surfing waves when the Meltemi   blows, which  it does frequently in the summer. A small taverna behind the tamarisk trees is as organised as a Serifos beach gets. Kalo Ambeli is a sweeping crescent of white sand with shallow blue water backed by those radiantly tawny  cliffs tumbling all around it.  You have to walk down a little path for a couple of hundred metres, past a tiny church and a little stream filled with reeds, pink oleanders, chirping frogs and lizards.  If you have rented one of our two pretty houses here with pools and spectacular views over the cliffs and beach,   marvel at the privilege of having a stunning, pristine beach, sparsely visited even in mid-August; just a few lovers holding hands. There was a girl called Ileana (my name,) having an argument with her boyfriend on the path down to the  beach.  My husband looked at him sympathetically and said that he might as well give up now… 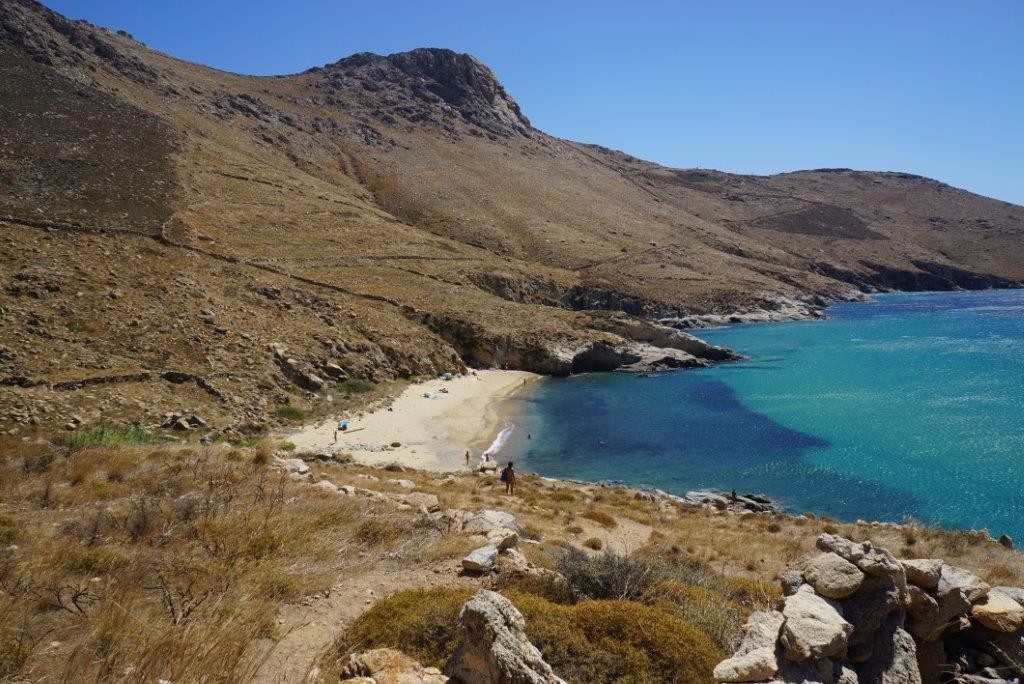 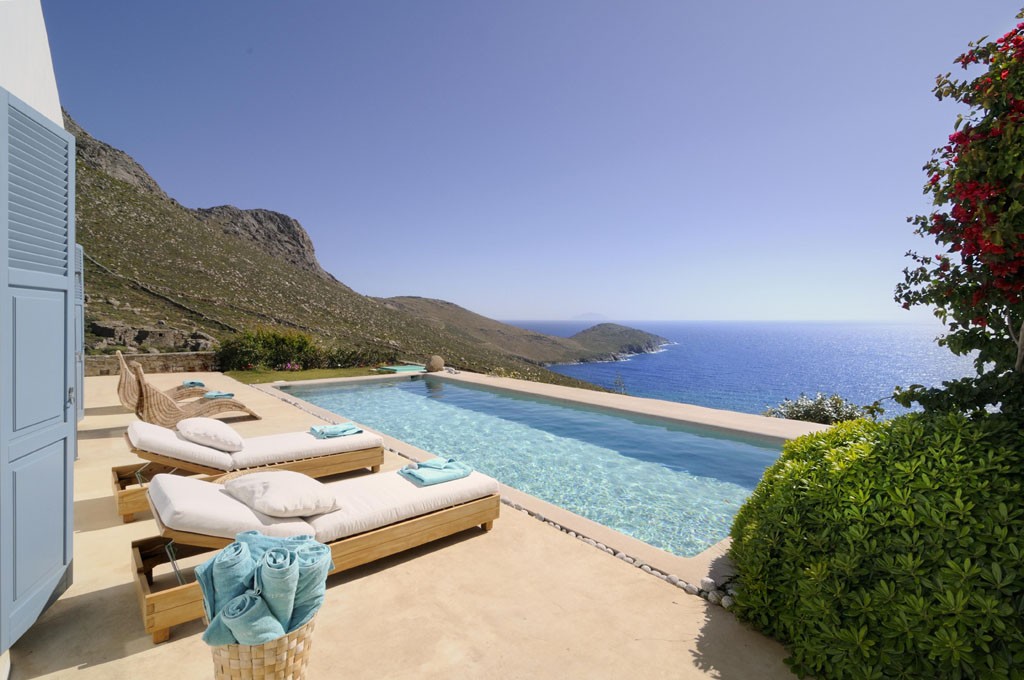 Villa to rent on Serifos

Leivadi, the main port, is a charmer;  overlooked by the pyramid mountain with Chora on top, a seam of golden sand runs the length of its bay,  with little bars and tavernas and  outdoor internet cafes. Kali is the restaurant of choice for the chic French and Italians who have quietly made Serifos their own. 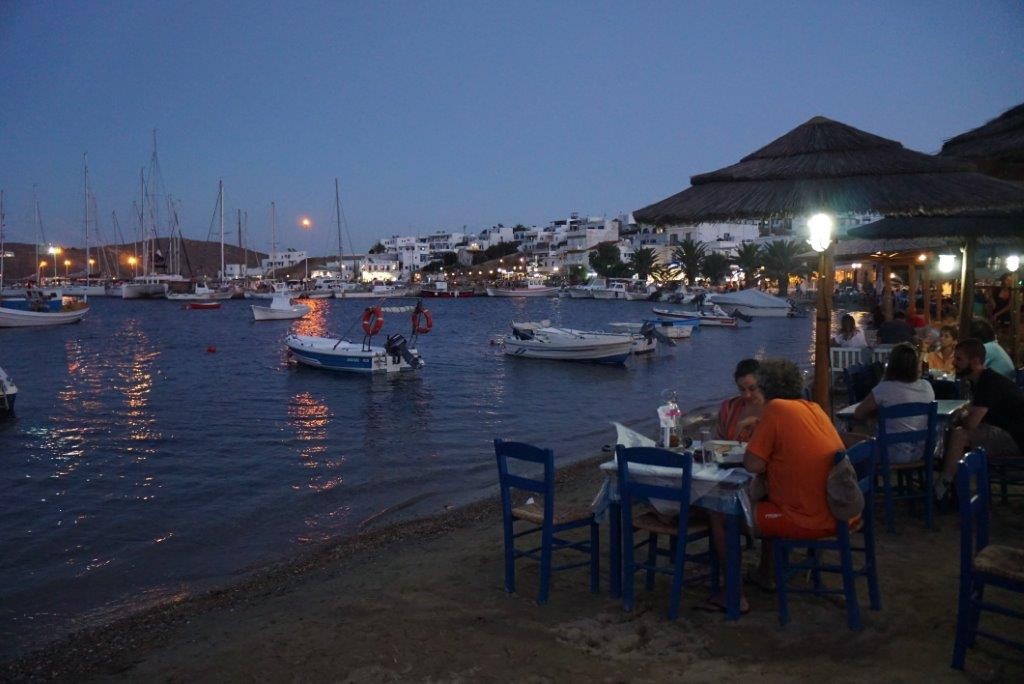 The bay of Kalo Livadi is remarkable for the lovely 19th century facades of the  mining company  headquarters – traces of the old mining docks rust picturesquely into the bay, and have made reefs for scuba divers and fish to play in. Tamarisks line the sandy bay, under whose shade two great tavernas produce copious platters of seafood  for those who are not in a hurry, while cats perch in the branches waiting for diners to rise, groggy with food, and hope for left-overs. The wonderful medieval village of Chora can rival anything on Santorini or Patmos as far as I am concerned- staggering views from the  Chora church, perched high up in the blue sky on its crag, a fabulous little plateia or piazza  that acts like an outdoor living – room for the writers, artists and chic young people who come up to enjoy the sunsets and hip small bars and ouzo places. “Stratos” is for the regulars.. Mrs Dimitra was born here, and still dries and salts tomatoes and figs for the winter on her balcony with an eagle-nest view, as her ancestors have done for 500 years. Mules are still used to carry Le Bric suitcases up and down to the  little boho-chic refurbished  medieval houses owned by the artistic New Yorkers who gather in the village square. They have often written the coffee table books lying on their tables. The owner of our very chic, designer beach villa down in Karavi where we are staying, has also got one of these little houses, and has written a cookery book too. Mrs Dimitra and her dried figs and tomatoes 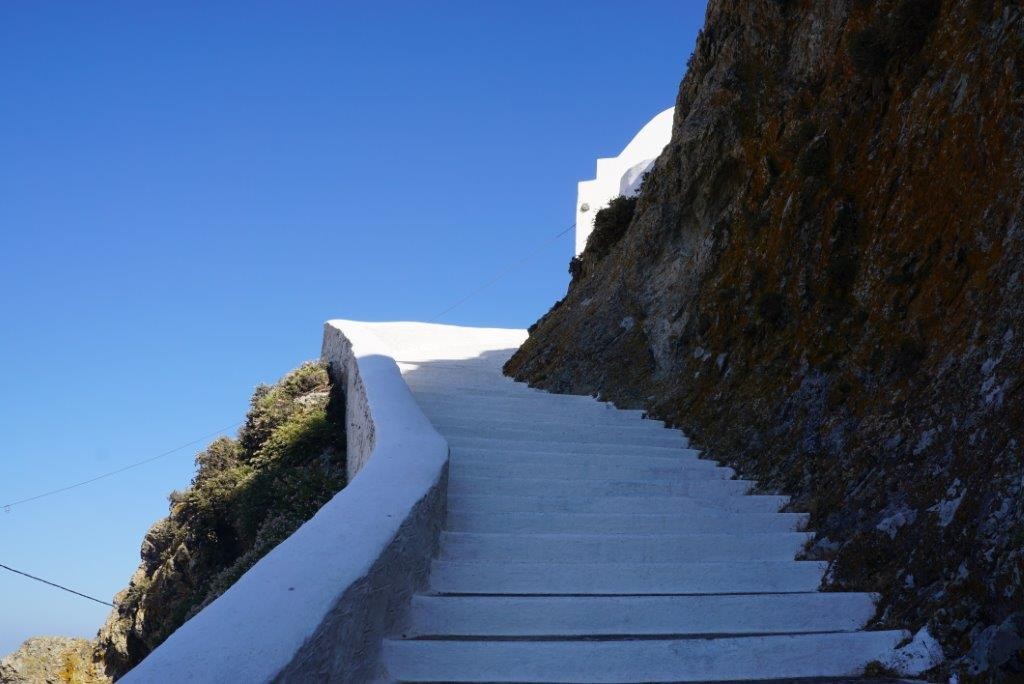 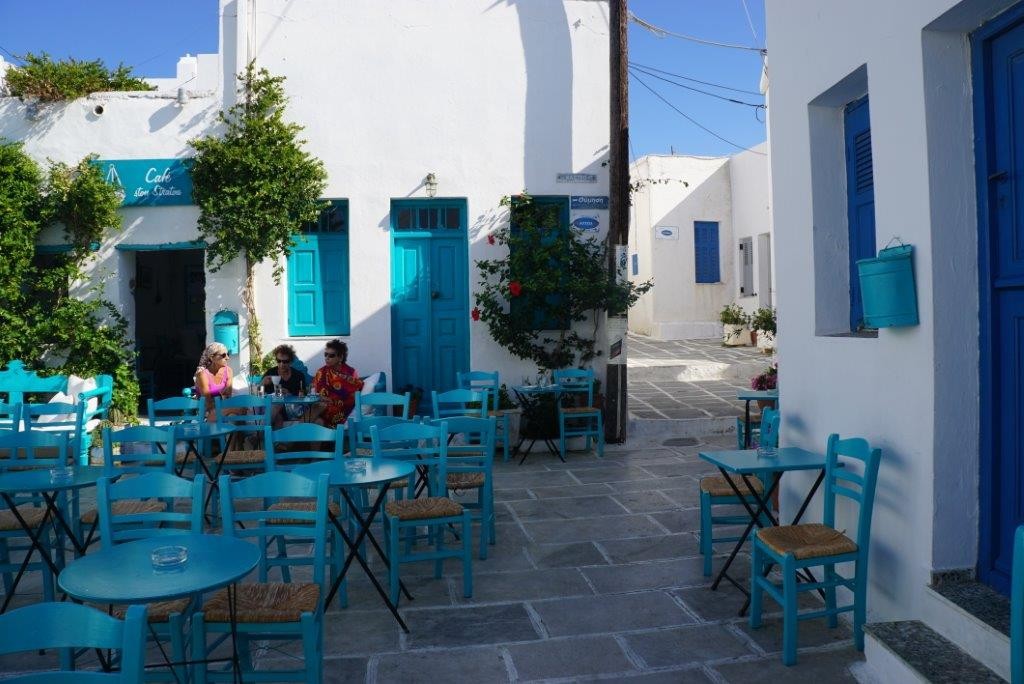 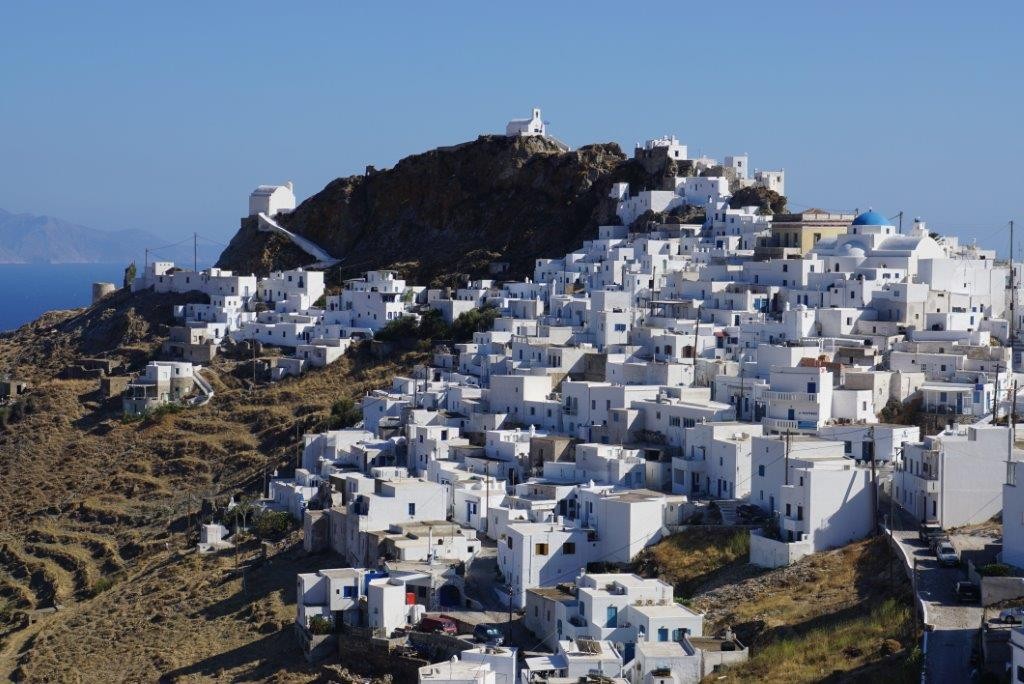 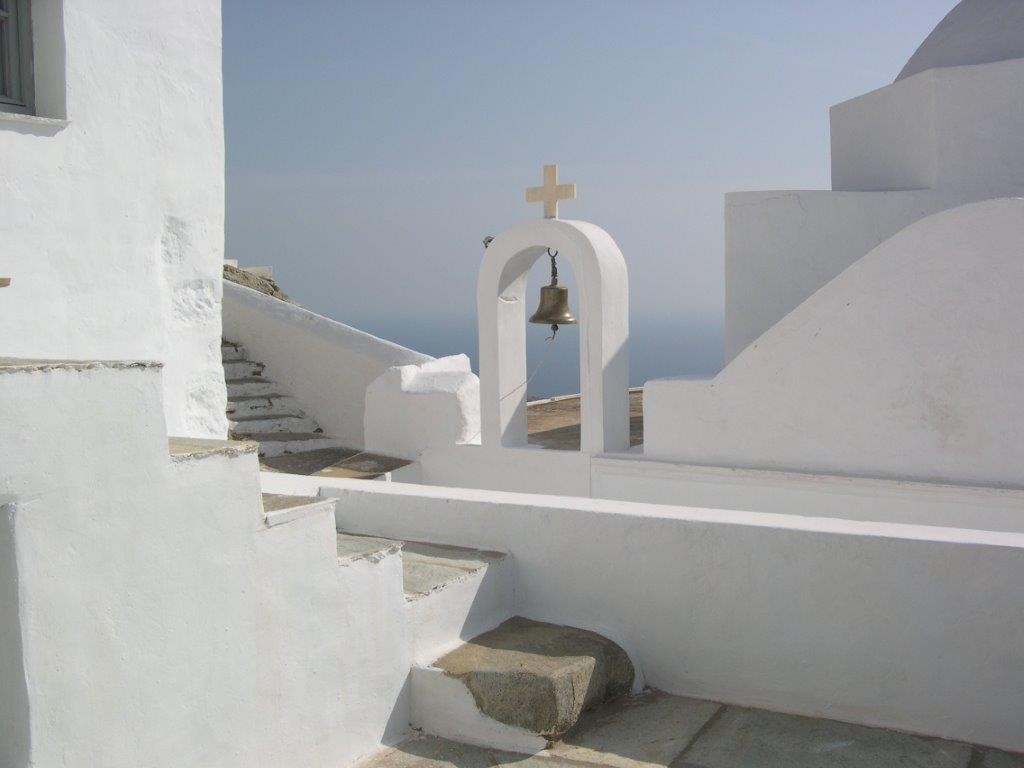 George Zafiriou is the maverick Athenian architect with cult status, who has found Serifos’ soul – We have been fighting for years as I tell him  no one will rent a house without air-conditioning. He laughs hilariously at the idea, and tells me is off for dinner with an Italian friend – An A-list Italian fashion celebrity, who has bought one of his houses with undressed stone walls, old stone  water-trough  hand basins, no A/C  and  curtains made of sacking. It was featured in Coté Sud recently. He thinks I am unbelievably bourgeoise. I very cravenly tell him that it is my clients who are bourgoise, not me…. We meet outside a house he has recently built that is for sale;  He is sitting on a stone wall  waiting for us,  swinging his legs like a child. The house is a converted stable with internal courtyards and a stone pool that used to be where the animals were dipped, thick stone-walls,  no view, (definitely no air-conditioning,) currently rented by a super-elegant Parisian family, who treat him with the deference accorded by  the French to great designers. “Monsieur, nos compliment les  plus sinceres pour le chef-d’oeuvre que vous avez fait ici, c’est vraiment remarquable.”  He smiles graciously and I follow ten paces behind him looking submissive. Our designer-chic beach house where we are staying is a few kilometres from the port down a bone-rattling dirt road. It is 30 metres above a  small secluded, sandy beach and is a symphony of grey and white,  stone, cane, cotton and linen.  A scented garden of jasmine, rose-geranium, basil, lavender, oregano, grape vines and fig trees perfumes the air, and the south-facing views over to Sifnos fascinate all day long.  The owner, apart from writing a lovely life-style cookery book, is well-known decorator. George Zafiriou, who knew the house when it was a stone fishing-cottage, hopes that it isn’t too chic. I tell him that it couldn’t be more chic, AND it has air-conditioning. He tells me again that I am bourgeoise and looks sad. I just love Serifos and everyone on it.  I love the colours, the simplicity, the soul, I sit on the terrace of our house surrounded by wafts of  jasmine and watch the moon rise over  Sifnos, and think again – Greece is for lovers.