Where to party on Mykonos, what to eat, and what to wear.

So, feeling our age after a very busy summer, Five Star Greece asked a beautiful, young half-Brazilian half -Greek jewelry entrepreneur, who exhibits  cool, funky jewelry on her website, www.varvaralondon.com  to tell us where the party is at on Mykonos, and what to wear. She went with a bunch of equally beautiful friends and we are exhausted just reading about it.

“We  have hit the nail on -head  with Hephaestus’s proverbial hammer when it comes to the ultimate balance of late Greek dinners, beaches and cosmopolitan parties;  here are our tips for  Five Star Greece guests with  stamina;

Set up home for an entire day at Hippie Fish, a bohemian beachfront restaurant in Agios Ioannis.

Set at the shorefront, there’s a pleasant equilibrium between sea, swimming pool, restaurant and lounge that makes it very easy to forget to leave.

Seize the moment in the early afternoon should the area at the end of the pool be free, as you can lay back in a reclaimed speedboat, flipped on its side with the hull dug out to make space for comfy cushions – an ideal spot for 4-6 people to have a glass of wine as the daytime heat slips away.

A well put- together daytime food menu includes good fresh sushi, they do great banana smoothies and  cocktails. All this, accompanied by a friendly resident DJ who  tweak up the volume closer to the weekend. A little boho-chic boutique to top it all off…Keep your eyes peeled for Kat Blink Jewellery that pops up over the summer months, if it’s sold out, check out www.varvaralondon.com for year-round sales. This is the place for crystal blue waters and an ambrosial lunch that will guarantee a deep and well-deserved siesta on the beach beds.

Music is a huge part of the dining experience all over Mykonos, and raises the tempo after a few bottles of rosé, as can be seen by the number of happy people dancing around  and on top of the tables.

Whether you are two or twelve people, sharing is certainly caring here and greedy groups need not fear here, as there are “lazy susans”  to keep the food moving in everyone’s direction. Fresh food and fantastic service keep this place top in our books – ceviche, lobster and prawn Tabbouleh will get you in the mood for generous helpings of Monkfish cheeks with poached quail egg and a mushroom risotto with truffle oil to absolutely keel over and die for, one of the best dishes on the island. Down a tricky road to the Southern tip of the island, Scorpios rises up out of the dry landscape like a dune bug surging up from the sand. All in beiges, browns and stone-tones like the rock its sits on, Scorpios has tapped into the best of everything from its relaxed beach vibe to the starlit dance floor once the sun has taken leave. Uninterrupted views out to the Aegean Sea makes for the perfect sundowners. 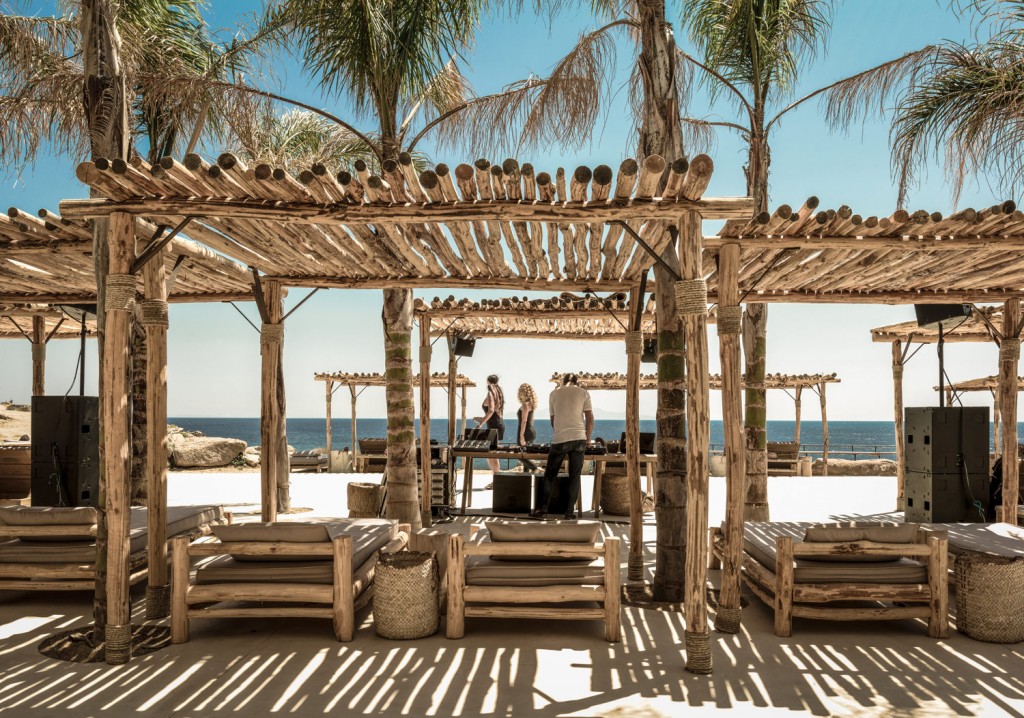 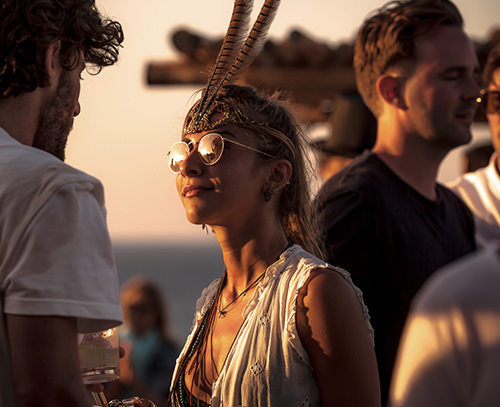 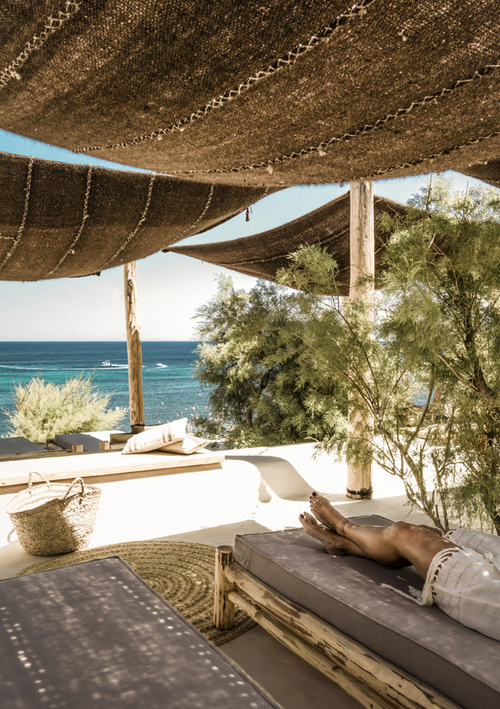 Alemagou is a perhaps a little more wild and out of the way than most, placed at the shores of Ftelia beach, a windsurfing haven, it is again an architectural triumph in keeping with its natural surroundings. During the day you can lunch under the thatched roof restaurant and at night, under the same roof or by the beach, you can dance under a blanket of stars. A string of famous DJ’s are given the night to play from a podium at the front so that as the sun sets behind, an overwhelmingly celestial atmosphere is cast over a crowd of dreamy dancing spirits.

Everything about this corner of Mykonos is rather mystical and quite spectacular, particularly once the night falls… 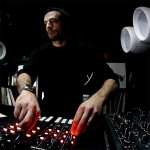 The Late Dinner at Sea Satin

Late dinners are the key to surviving the late nights.  Sea Satin is a Greek-owned restaurant in Mykonos town that comes to life past 11:30pm.

The way to go about this is to book a table in advance and arrive at 11:00. The food is Greek, and then some. Sharing highly recommended. Fantastic seafood linguine, fried calamari and a big Greek salad should do the trick – topped off with shots of ouzo – this should take you to around about midnight, when the Greek music makes its entrance followed by the sound of smashing plates and food on the table is replaced with dancing feet. Some of the wildest weddings and parties take place here,  the atmosphere is unbeatable. When the  Gypsy Kings played here for a private event, the police cordoned off the whole area – but no nasty red cones, just little candles in paper bags. Very Mykonos. 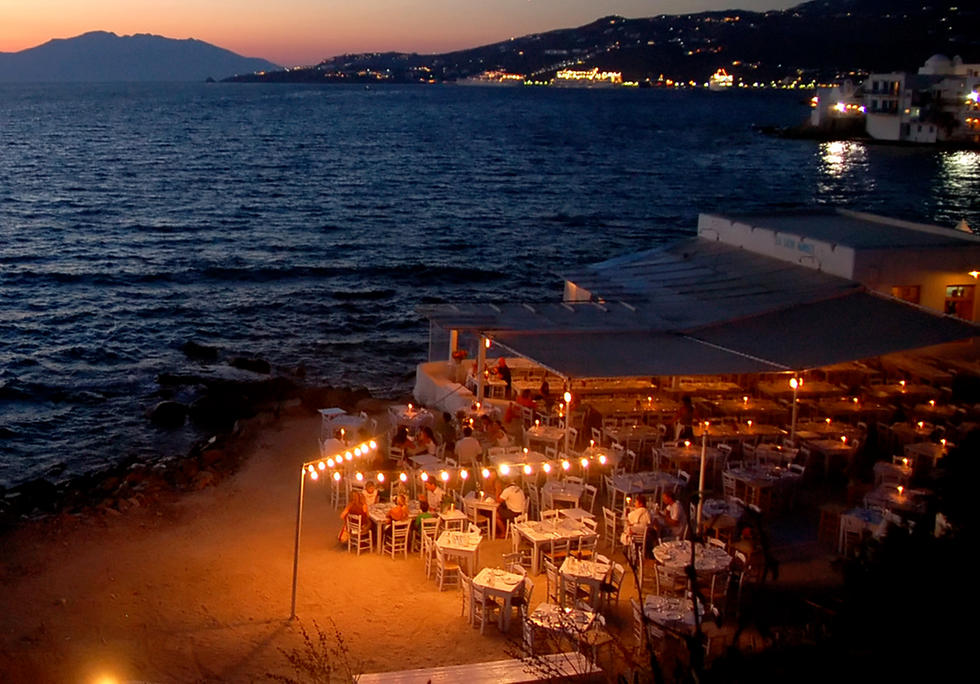 And if you have the Moni…  start late, end later – Moni is the  place  that is going to stay alive and kicking until breakfast time.

Filled full with the beautiful bodies from the beach, Moni  has a great presence and personality. Inconspicuously located right in the middle of the ancient, fortified entrance to the town and only a few meters away from Mykonos’ most iconic church, Panagia Paraportiani, you still get a sense of depth and even history (despite champagne bottles and sparklers flying around) and if you stay long enough, you can see the beams of light through the dark shutters as the sun comes up in the early hours – altogether quite transcendental. 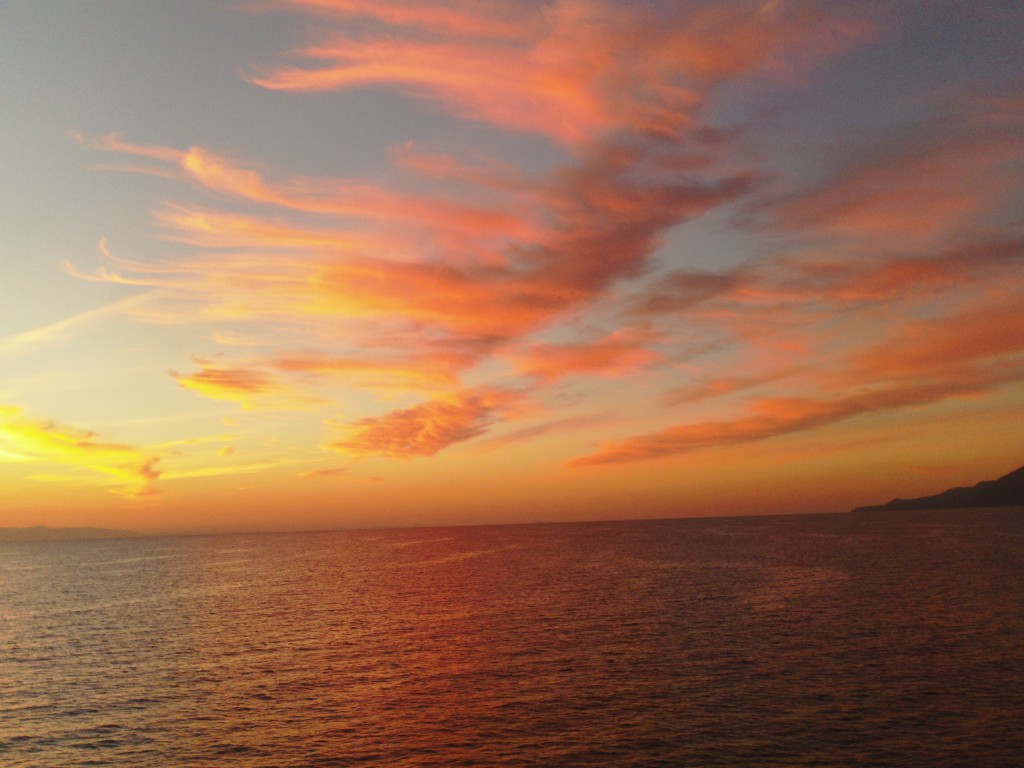