Despina, who is normally  the merriest and sweetest of souls, was giving me the death stare over linguini at Joe’s Cafe in Sloane St. “Promote Andros? Encourage tourists?? May I ask why on earth you would want to do something like that???”

I felt like a 12 year old called in to see the headmistress in her study right this minute please and pull up those socks and straighten your tie on the way..

Despina sighed. “I am off to Athens to go to the opening of Ioanna’s Andros Heritage exhibition and book launch, and you can call me when I get back next week.”

“Well, will you at least write about the book launch for our blog” I asked, hopefully. “No.” she said, and called for the bill.

Despina is a lynch-pin of old Andriot society, a sophisticated and cosmopolitan London Greek, and a very old friend. We are even related – on the non-Android* side. If I can’t swing her round, I might as well give up. 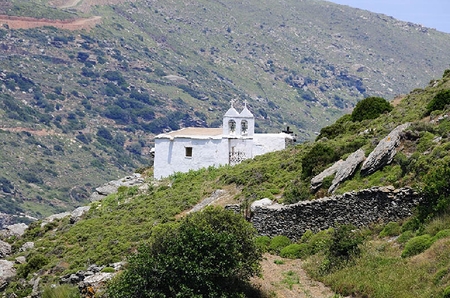 Andros is rather like Port Hyannis. It is the preserve of the best-looking and most civilised of the great old shipping families. It has more foundations, institutes, art collections and museums housed in its spotless and perfectly preserved mansions than any other island. If you aren’t called Goulandris, Embiricos, or Kairis, the old joke is that you are unlikely to be allowed into Chora, the spotless and perfectly preserved capital crouching on its spit of land, crowned by a ruined Venetian castle and bashed by the meltemi waves, while gleaming yachts lie at anchor, and the geese on the beach strut their stuff along with the pretty girls. It is just a joke though, and it goes without saying that, even if you are not a Founding Family, you will be allowed in,  have a lovely time, and be very welcome too, but there is nowhere to stay in Chora unless you have friends, or have rented  a villa or one of the neo-classical town houses a stone’s throw from the waterfront,  with courtyard and terrace, from semi-insiders like us. 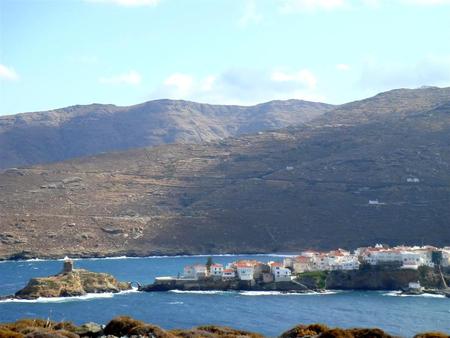 On May 10, 1821, Theophilos Kairis, one of the leading intellectuals of the Greek Revolution, whose descendants are today some of the most impossibly elegant Andriots that ornament London and Athens, marked the War of Independence by raising the Greek flag at the picturesque cliff-side church of St George: his famous speech, or “ritoras” inspired shipowners and merchants to donate funds to build a Greek Navy to fight the Ottoman overlords. And those same families have been amongst Greece’s foremost philanthropists ever since. 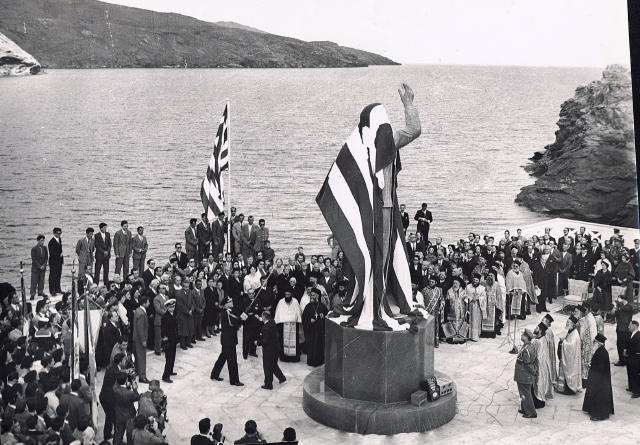 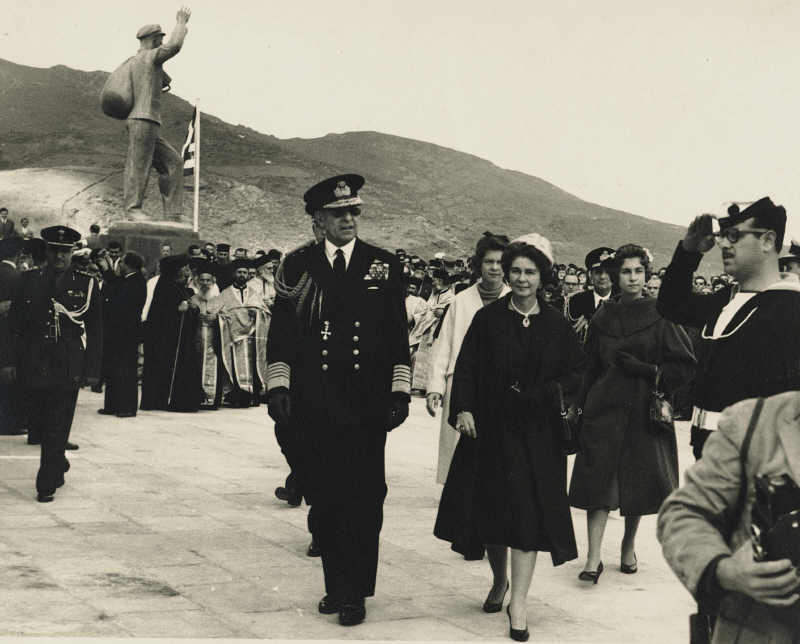 Pictures from the Royal Visit to Andros in the 1950’s

The book to whose launch Despina and all the great and good of Andros are going, is a collection of photographs by our very own Ioanna Nicolareizi, who takes all our villa photographs, and has made a valuable documentation of the fabulous neo-classical mansions and neo-classical families of the island. If you are in Athens on the 3rd of November, do  drop into the Benaki –  brush your hair and dress nicely please, and it would be best to murmur “Goulandris” if anyone asks what your name is, before gliding off. 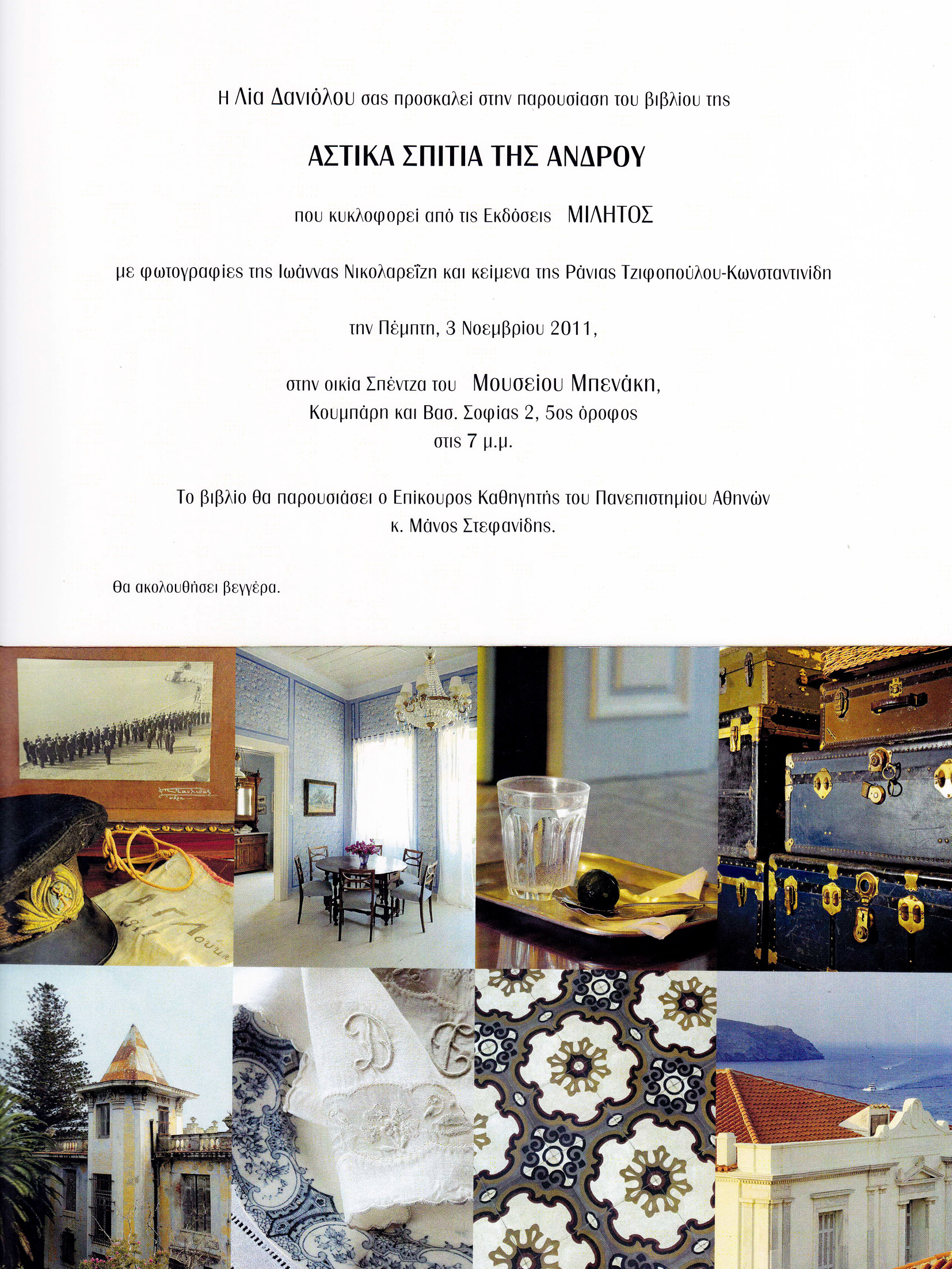 Joking aside,  apart from car-free Chora and its Venetian/Byzantine/neo-classical maze of mansions and whitewashed steps, you can explore the  lovely countryside of the mountainous interior of Andros, where well-tended orchards and vegetable gardens testify to the fertility of the island and industrious nature of the Android farmer and his wife. Mountain streams rush down between the hills, and create long oases of green valleys with cataracts,  and white-washed dovecotes,  churches and monasteries nestle inside their cypress groves. If you haven’t brought your yacht, a rental car will do fine, as there are many lovely beaches you can drive to. Achla is one of the loveliest, with its terrapin-filled lagoon , waterfall just behind the crescent of perfect sand and pale blue sea, all elegantly framed by a little white church. 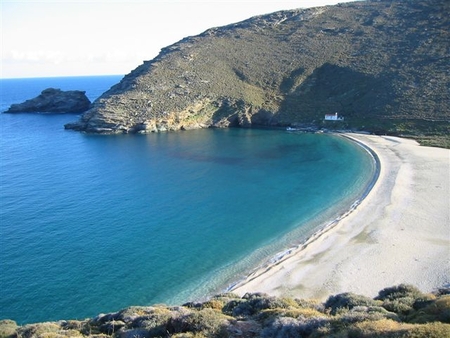 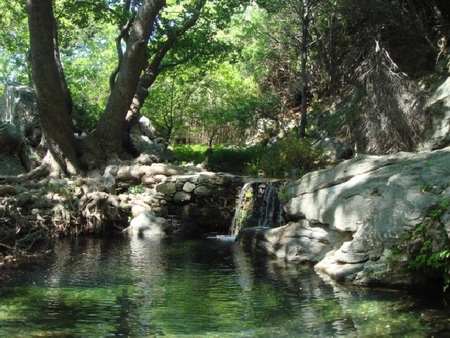 Almost within champagne cork-popping distance from Chora , we have a beautiful, peaceful country house with organic produce and pool,  as well as an ultra-modern, 9 bedroom luxury pad with its own beach, and a James Bond style elevator down to its own private beach bar.

Wherever you stay, in one of our villas on Andros or not, Despina did soften enough to kindly open her Andros address book and give me the name of Ta Skalakia, which is the best restaurant in Chora,  so there we are;  the thin edge of the wedge. You can consider yourself already there, unless of course you are riff-raff,  in which case….

*The correct English adjective is Andriot, but everyone, espcially non-Andriots, say Android. Don’t try it on your first visit though.