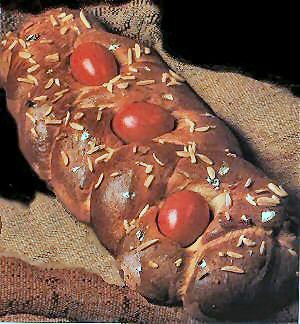 Tsoureki as it should be

Today is Palm Sunday, the beginning of Easter Week or “Megali Evdomada”

Easter is the high point of the Greek year, much more important than Christmas – to my father who was of an older Greek generation, Christmas was just a day when his devout mother would try to impose yet another fast on the family and the dreaded lentils would make another appearance at table. He never got used to the idea that presents should be given, and would get horribly crabby around mid December. Easter on the other hand was  the climax of a finely orchestrated succession of fasts and festivities, and although he only went to church for weddings, (and then, only his own as a rule,) he would make an exception for Easter, suddenly ban all meat and animal products from the house on Good Friday, and cry a lot when he heard the beautiful Easter lament of Friday night and the joyous Resurrection hymn of Saturday midnight sung in Church. All very bewildering for us children suffocating at knee height between the herds of fur coats in the crush of midnight mass.

Now I am an adult and have put aside childish things, I find myself responsible for family Easters. My father is long dead, my mother too, although as a non-Greek, she never really knew what was happening, and my favourite Greek aunt has moved back to Athens. Her daughter Maria and I have managed to sort of replicate the Easters of our childhood; Maria does the Mageiritsa, a complicated and delicious broth made of lamb bits, dill, spring onions and egg, designed to re-introduce meat after the month long Lenten fast, while I make the Tsoureki – the braided Easter bread decorated with red dyed Easter eggs.

My first attempt was done according to all the rules – on Good Thursday I kneaded the dough three times and put it in a warm dark place, so that, like Jesus Christ in his tomb, three days later it would rise. Every day I inspected it with a pride that grew as the bread obediently rose. By Sunday morning, the Tsoureki was a monster –golden hued, perfectly braided and at least 6 times the size it started out, with a red egg nestling in the middle. I carried it proudly to my cousin’s house where it was greeted with applause.

Alas, as Maria’s husband took a knife to it, a thunderous crack shook the table, and my beautiful Tsoureki turned out to be a hollow shell that shattered as the knife pierced it. I felt that this was in a sense an accurate if merciless reflection of my imperfect religious upbringing.

Maria, who, having a proper Greek mother, was much better brought up than me, produced a perfect Mageiritsa. 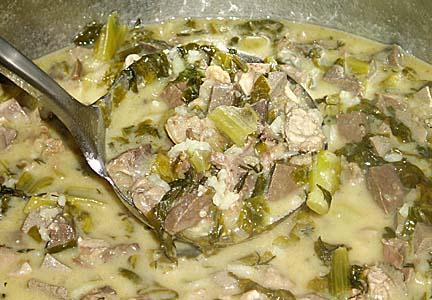 Mageiritsa - tastes MUCH better than it looks.

This year even Maria is not around, so Mageiritsa is off the menu, but I will let you know how my Tsoureki does – Kalo Pascha and Christos Anesti to you all!