I am reading John Lucas book “92 Acharnon Street – A Year in Athens”, written about a year that the author spent in Athens in the 1980’s. While he responds sensitively to the Greek landscape, smells, sounds and tastes, and writes beautifully, he suffers from the “Zorba Disease” – Outbreaks of this were first noticed in the South of France, where the chief bacteria-spreader was Peter Mayle – who set off a virulent strain called “A Year in Provence”.

Symptoms are:
Over-straining to perceive the big-hearted nobility of the Greek Soul.
Inability to distinguish reality from imagination.
Delusion that in every Greek there lurks a poet, humorist, artist and philosopher.

Acute cases, like John Lucas’, see a Zorba in every Greek below a certain income level, and a wonderful humanity and freshness in every bad-tempered Athens traffic snarl-up. When this delusion extends to cast the Zorba glow over even the bureaucrats sitting in the offices of the electricity and telephone companies, I would say that it is terminal.

He includes some lovely poems though, and the book is worth getting for the  lyrical evocation of Greece, even if that of the Greeks is as irritating as hell.

Still, I suppose that while such a rosy view is irritating to Greeks like me who are unable to find even a hint of a single Zorba trait in any bureaucrat that I have ever had the misfortune to need anything from, any good press is welcome!

Just make sure you use a disinfectant handwash after you put the book down, to avoid passing on the virus. On second thoughts, perhaps what we all  actually need is a  good case of clinical Zorbitis. I take it all back, please buy the book! 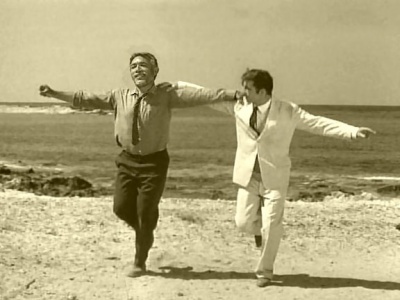 Officials from the Electricity and Telephone companies expressing their Joy of Life.