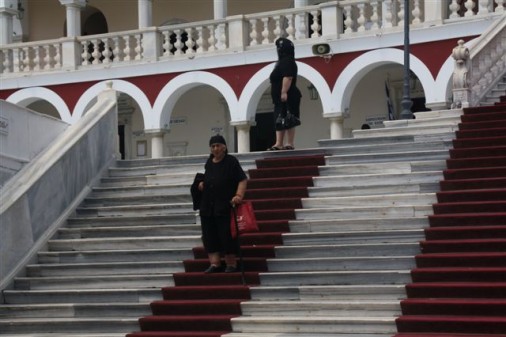 I urge you to discover Tinos for yourselves. My 24 year old daughter who is accompanying me on this trip, so far has only really seen the  point of Mykonos and seems to have an in-built homing device programmed for Le Caprice; Now her plan is to buy a house on Tinos and go to Mykonos just for the weekends using the fast and frequent hydrofoil. A good plan actually…

Tinos has class; the Tinians are proud of their island and traditions – they cook beautifully, rear happy animals, preserve their refined marble carving and handicrafts, make cheese and honey, bring their children up to respect their elders and priests, and have no idea how much their island has to offer. For centuries, they have been one of the most important pilgrimage centres of the Orthodox world – the road from the harbour up to the Cathedral of the Annunciation has a  (worn)  strip of red carpet inlaid into the pavement for pilgrims to ascend on their knees. Hotels have the church Mass times printed in the rooms instead of prices..

For those not on a pilgrimage, like my daughter, for whom a  strip of red carpet only means the immminent appearance of Johnny Depp or Michael Fassbender, Tinos has other delights: There are 25 or so villages of great beauty and antiquity; houses dating from Byzantine times with ancient marble carvings around doors and windows, venerable plane trees fed by Tinian streams, delicate marble fanlights set into walls, their pierced and carved ornamentation filtering  a lacy patterns of sunlight into whitewashed rooms with cane-lined ceilings. Outside the villages are the famed Tinos dovecotes, dating from the time when Venice rules these islands, and the locals were encouraged to breed pigeons as a food staple. The builders  of the dovecotes outdid eachother to produce the most elaborate whitewashed fairy palaces; structures with niches and holes and patterns to allow doves to nest, and the descendants of those doves are still in occupation. 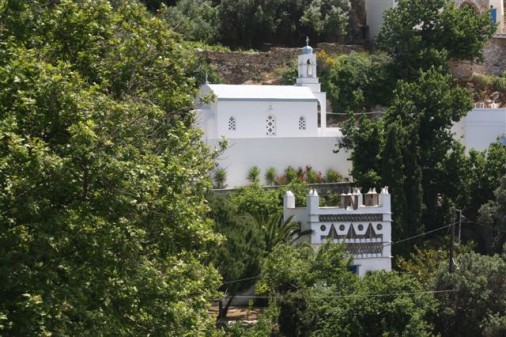 Five Star accommodation for Tinian doves, and church behind of course..

We walked through the village of Kardiani, cypress-framed and cooled by gushing streams and whispering trees, with doves cooing from the roofs. The architect we were with who was showing us his newest houses on the beach below, pointed out the architectural elements that inspired him – a continuum from Byzantine archways and acquafers  to  his latest stunning beach house with cantilevered wooden decking and a waterfall pool below. 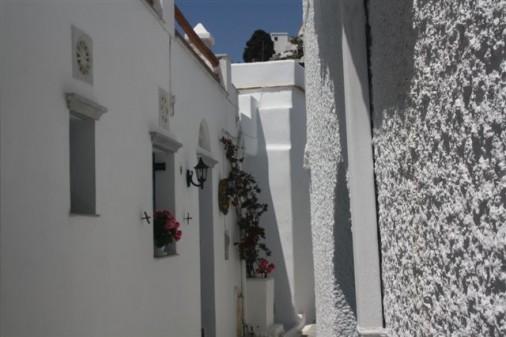 Inspired by a medieval village wash-house

Mrs Delatola has a cute coffee-shop perched in a  balcony of one of the village houses in a narrow, flower-filled lane,  like one of the dove-nests; she came out cooing like a dove,  and brought us tiny cups of thick, sweet Greek coffee, a pitta of onion, dill and fresh cheese,  and a fragrant, light, syrupy orange cake.   Doves fluttered around the blue dome of the church above, and a small child came along the lane, all in a dream,  singing an old song.

Paradise.  And we didn’t need to ascend a red carpet on our knees to get there, our little Fiat Panda did the job just fine. 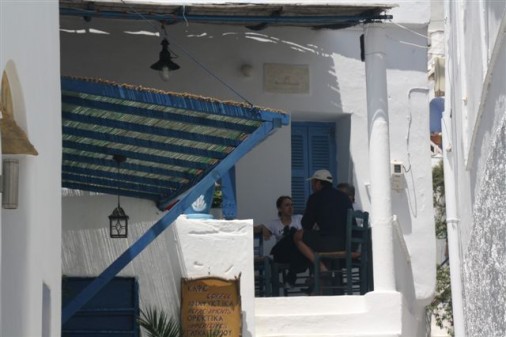 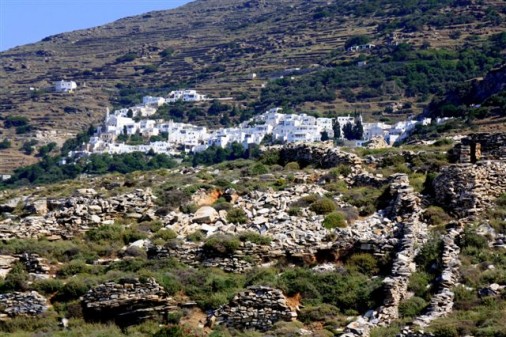