Skopelos, the largest of the Sporades islands, is one of Greece’s most overlooked islands in spite of Mamma Mia being filmed there… pristine green pine forests with plane and sycamore trees give way closer to the sea to Mediterranean herbs, with  fine beaches under towering cliffs, sandy crescents backed by pines, and some rather scrubby villages. Only a 45 minute water taxi or seajet ride from Skiathos town, but a world away. The Sporades are famous for their fragrant pine cloaked mountains and soft sandy beaches – 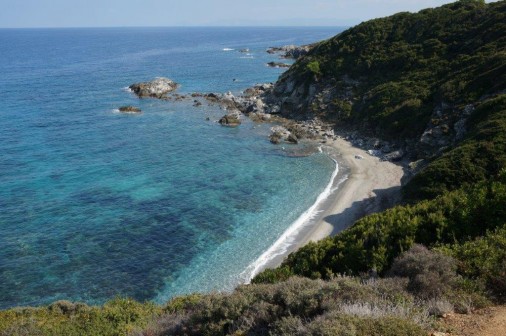 Where Skiathos has the airport, clubs, hotels, snack bars and  villas, Skopelos is dreamy, quiet and rather unconcerned with what  goes on around it, in fact,until the 1960s. the two end s of the island were unconnected by road, and the two main villages  could only reach eachother by a 9 hour donkey ride along the spine of the mountain. Even today, it remains somewhat  left  to its own devices as the officials responsible for planning, permits etc can’t get there and back to Volos, the  administrative capital, in a day, and don’t get an overnight allowance, so the Skopelites tend to take things into their own hands, which seems to be working rather well for them and for the tourists I have to say. 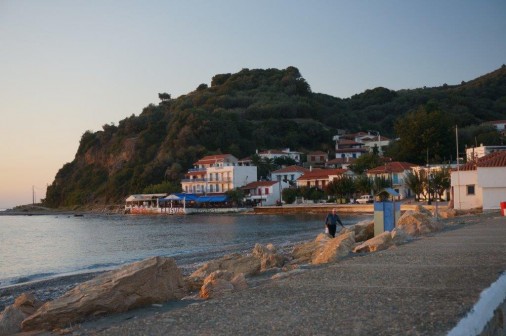 I went to meet Marc Held, star Parisian designer/ photographer/architect, who suddenly left fame and accolades behind in the 1990s, and went to live in Skopelos where he takes on select commissions to build houses that enshrine and celebrate the vernacular  decorative elements of his beloved island home. The “sacré feu” burns bright in him, undimmed enthusiasm and passion belie his 83 years.

He buys old doors, reclaims old tiles, photographs architectural details of brick patterns and slate roofs, and the locals look on him fondly as their very own village idiot who should be protected and indulged.

His own house is  an airy confection – a cross between a tree house and a sailing boat, an elven palace out of Lord of the Rings – a wonderful raftered living room with decking outside, and the tree tops of the steep slope below  framing the wide sea stretching to the south east – sunrise and moonrise,  my favourite orientation.  I can’t understand why people want to squint into a  glaring sunset – nicer by far to gaze into the fading blue as the sun sets behind you turning the clouds a  last flamingo pink, with maybe a couple of dolphins leaping far below and the sound of the surf crashing on the sand. 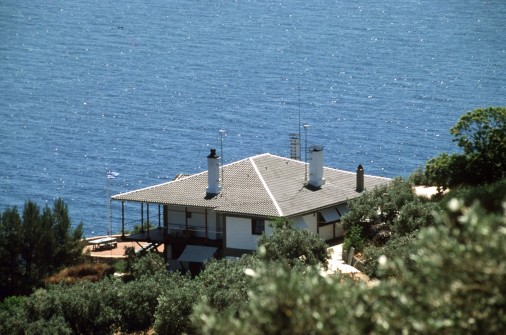 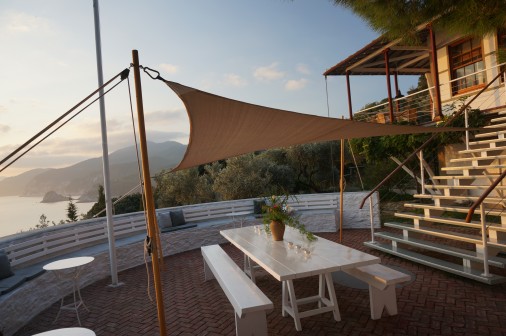 A pool with heating and cooling – “ I can’t stand tepid water.” A big, burly Ukrainian manservant  called Roman does unexpectedly pretty flower  arrangements  for the bedrooms, looks after the land and pool, while Koukounitsa the donkey grazes in the field below. Marc’s photos, black and white that look like Cartier Bresson hang on the walls, Marc’s designs are in the kitchen, and the library of music and books lines the walls.