Losing your heart in Antiparos. 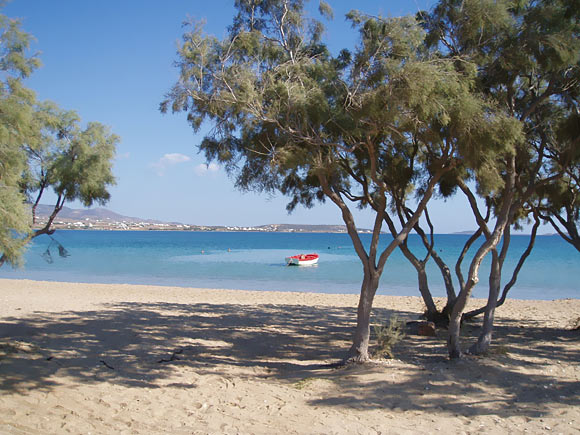 ‘There is nothing like returning to a place that remains unchanged to find the ways in which you have altered’. Nelson Mandela.

I used this quote to begin a chapter of my book*, a collection of real life virginity loss stories. The oldest person I interviewed was 101 years old, the youngest just 17. I took Nelson’s words and used them to describe the experience of reflecting upon our teenage selves. It’s timely then, that I get to use this phrase again. This time for a slightly different reason. I am returning to Antiparos, an island on which I spent many heady, happy summers between the ages of 18 and 23. 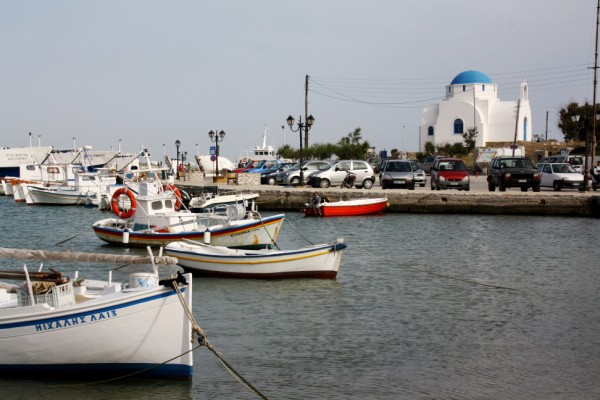 I’m a writer now, something, along with the concept of ‘the internet’ that I could not have conceived of in the 1980’s. My horizons didn’t extend much beyond the next party, the next boy and the next day back then. The centre piece of that bacchanalia was Antiparos, a Greek island that knew how to enjoy itself.
One of the funniest things I have heard since my ‘return’ was Jasper of Denmark’s comment. ‘What year did you first come here?’ he asked me.  ‘1986’, I answered. ‘Oh ‘86 was a great year’ he snapped back, almost as if it had been a fabulous wine. ‘Everyone was making love’.
That says so much about the Antiparos that I remember. I knew I had found my spiritual ‘home’ when I left my shoes in a ditch on the first day of my holiday and didn’t come back to retrieve them until the last. We spent the hours after midnight in ‘La Luna’ and when that closed, we sat on the beach until the sun came up. It was everything I had ever dreamt a holiday could be. And it was so much more than that. So why come back now? And would it be the same? 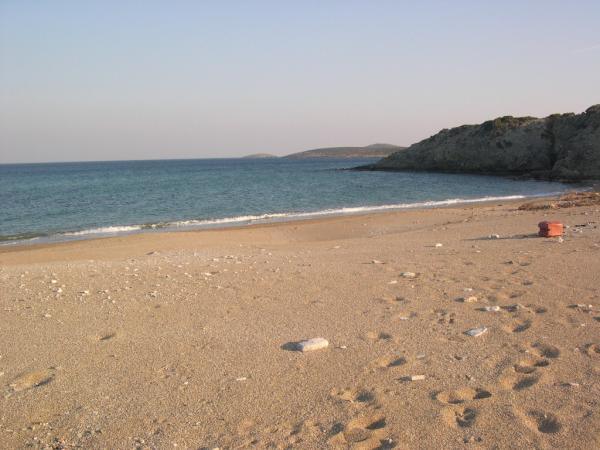 I guess the answer to the question is… would I want it to be? No. In a word. Which is why I have come in September. The party has gone back to school and I am here to write, relax and remind myself of what a real summer looks like. But will that be enough? And more to the point, will Antiparos, one of the big loves of my life, have moved on and changed? After all, I abandoned it for nigh on 20 years…..

It looks smaller. That’s to be expected. My 18 year old world was a lot narrower than it is now. When I took my first walk back up the main artery of the town, I tripped over The Square, scene of aforementioned bacchanalia, way before I expected to. There is more building along the front too. In fact, the entire village has moved outwards in every direction. I can see streets that I am sure were nothing more than dirt tracks in the mid 1980’s. But it’s all in keeping with the local Cycladic architecture. If you’d never been here before, you wouldn’t notice the difference. 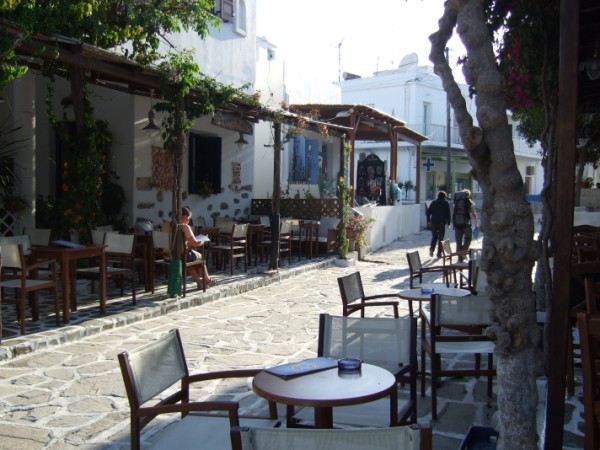 And that’s the point because Antiparos has changed only in so much as all the Greek Islands have changed. One trips across ‘lifestyle’ shops now. Places full of the sort of items usually only seen gracing the pages of Elle Decoration. What would I want with an admittedly very pretty ceramic door knob on a Greek island? There is one of those faux Ibizian style bars too. You know, long, low, white couches where you are supposed to sit and sip cocktails whilst imagining that you might be in the Cafe Del Mar. 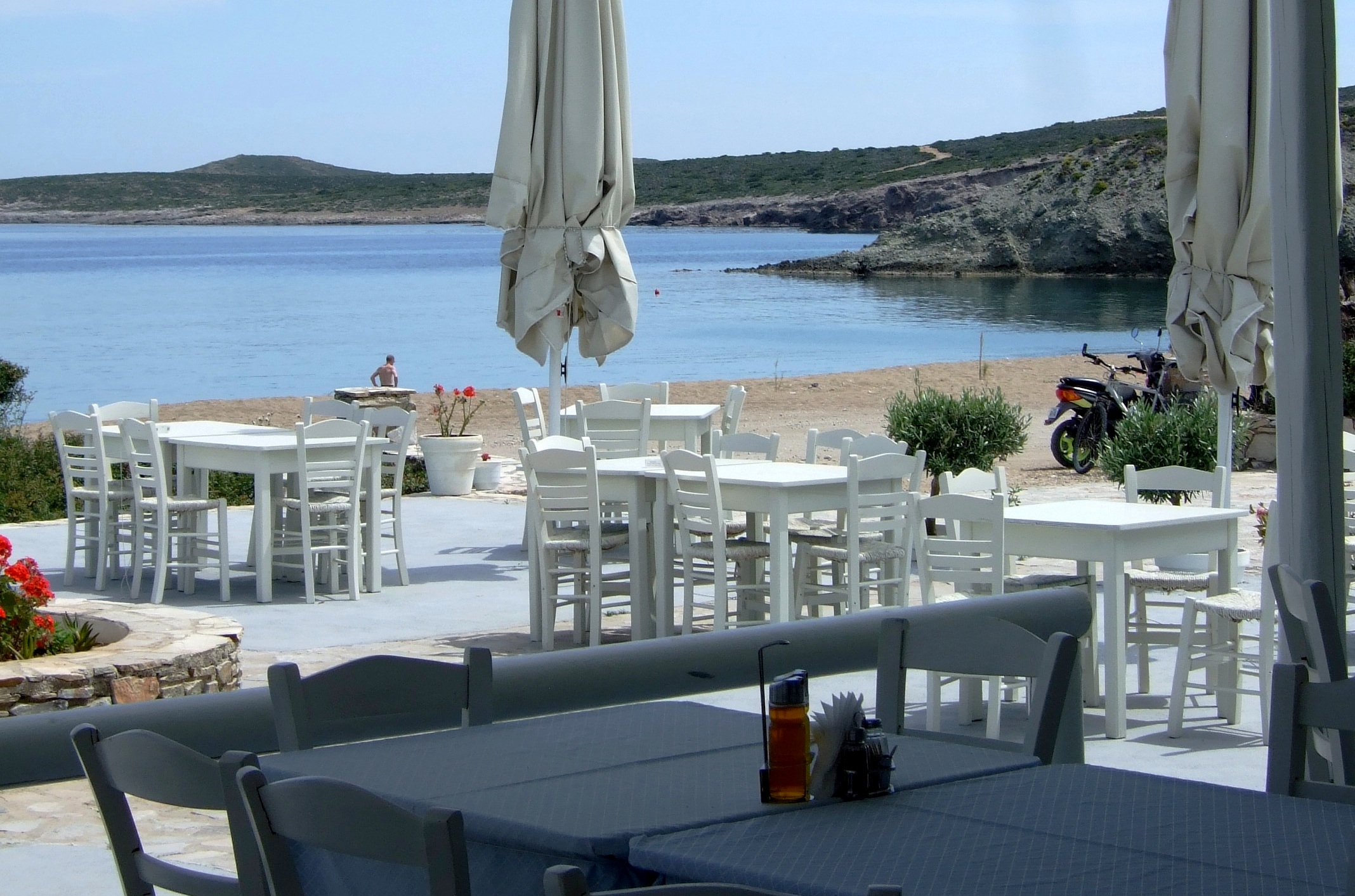 Who needs the Cafe Del Mar when you have Greece? I have spent many years travelling the Greek islands but I had forgotten just how beautiful this one is. It’s not just the clichéd mounds of bougainvillea that tumble over tiny balconies and frame windows painted classic Cycladic blue and white; it’s the discovery of a 15th century castle, right next to the bar where I was absorbed with matters far too pressing to realise that I was seated next to a 500-year-old wall.
Surrounding this castle is a collection of dolls house style dwellings that make you want to leave your London life on a permanent basis and set up home on a tiny Greek island. 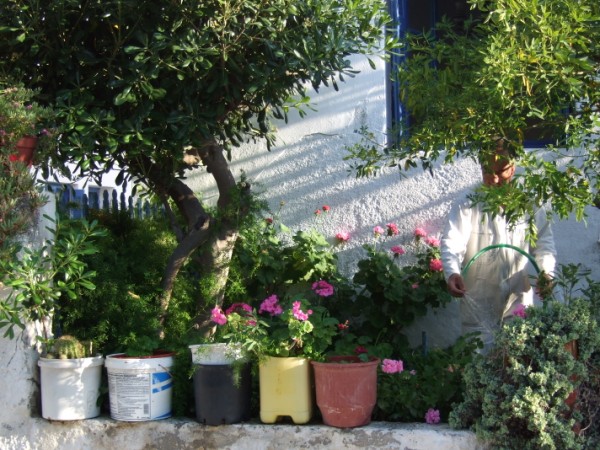 Eight kilometres from the main town is a cave that plunges hundreds of metres into the heart of the island. When you emerge from its dark cool respite the view is staggering. On the last day of my holiday, I made the perpendicular ride up to these caves on a bike. Afterwards, we rode down to the blissful beach of Apadima, or ‘Still Waters’ for a swim and later, onto St Georgios where we ate a late lunch with four more Cycladic islands laid out like dinner guests on the horizon. 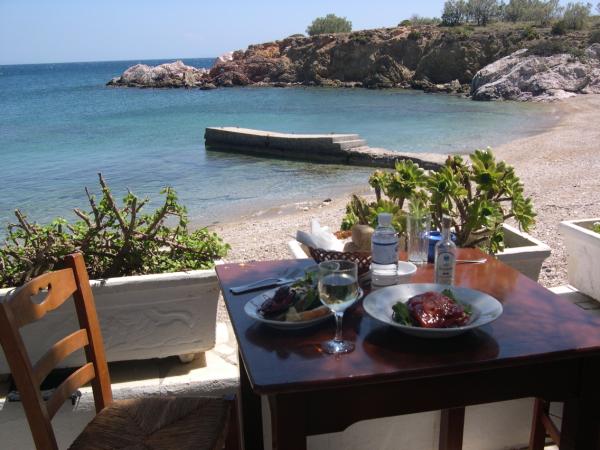 When I wasn’t sunning myself in the shallow waters of Psaraliki beach, just 5 minutes from my town house, I was sitting in cafe Margarita with Spiros, his lovely staff and a collection of sleeping cats, writing, being entertained by the locals and more often than not, just sitting and staring into the distance. Antiparos was my spiritual home in the 1980’s and it appears to fulfil the exactly the same function today. Except that now we have history together. 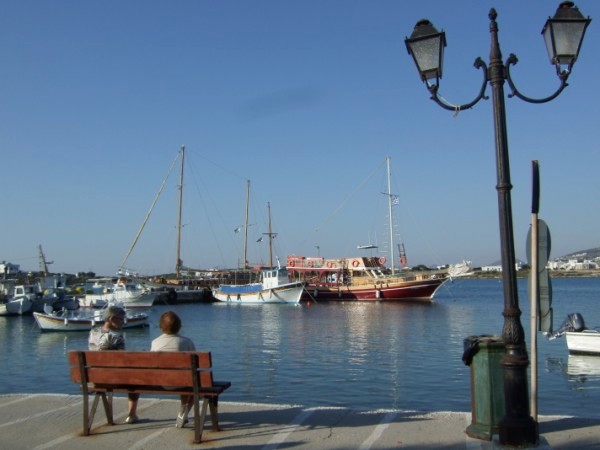 twitter: katemonro2
www.virginityproject.typepad.com
www.bigguysmalldogblog.typepad.com
The First Time: True Tales of Virginity Lost & Found (Including My Own) is published by Icon Books on 5th May, 2011 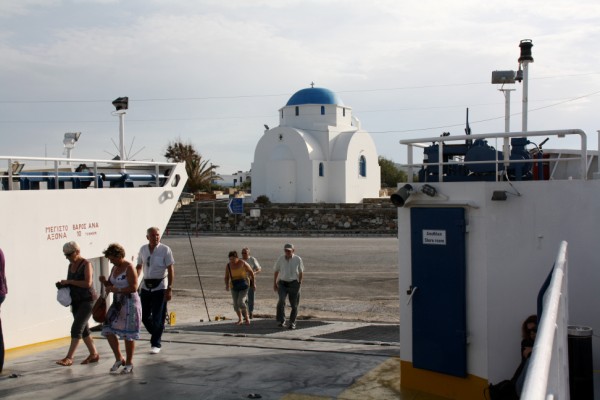