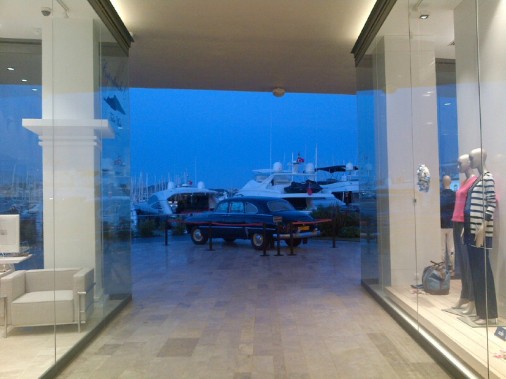 I am on the road again – “Oh dear God” , I hear you say,  “How much more can we take of  picturesque islands, cute little villages, white-washed churches turning pink in the sunset, lavender skies, Kiria Maria’s folk wisdom, children playing in cobbled lanes, flowers  and pigeons,  the blue of the sea, bla bla bla..?”

Don’t worry, this blog is different.  I am not going to write about our new house on Paros with a zen garden and a mediation chapel,  or about Santorini in October – this blog is about THE SCENT OF MONEY.

I am in Bodrum on the Turkish coast opposite the Dodecanese islands, to review the little fleet of Gulets that we recommend – those wide bodied, excellent value wooden yachts with smiley crew and good food that cruise this area. The largest one has just a rather successful refit, and Tamera, who builds and runs the boats as well as the best travel agency in Turkey, took me down to see the sparkling new jewel in the crown of the Turkish Riviera;

The Palmarina is the largest private marina in the Mediterranean, but I can tell you that it is absolutely NOT the Saint Tropez of Turkey as some have suggested. It is the Dubai, the Abu Dhabi, the Singapore, the Hong Kong of Turkey.

Its Azeri owner has poured – quite literally – somewhere between half a billion to 150 million euros, depending on whom you speak to, into the sea – creating a vast landfill with endless palm lined avenues, shimmering expanses of plate glass, pools of reflecting water, tinkling fountains, kilometres of  designer shop facades, spotlit atriums, cafes, playgrounds, aquaslides, restaurants, chocolatiers, delicatessens, lingerie boutiques, fur coats, butchers, oyster bars, jewellers and a beachfront club called “Billionnaire” which has an infinity pool and deck built above its own beach filled with sand flown in from the Maldives. The last person to ship in a private sandy beach round this area was Cleopatra.

The scent was unmistakeable – not the nasty, sour, penny-pinching, debt-laden strike-threatened reek of Euro-decline, but the powerful scent of blatant, unashamed , non-european WEALTH. I sniffed the air greedily like someone coming out into the fresh air after a long period in confinement indoors.

There is apparently a cute little village centre nearby, and probably some appealing village children playing  in the cobbled lanes, but quite frankly who cares… 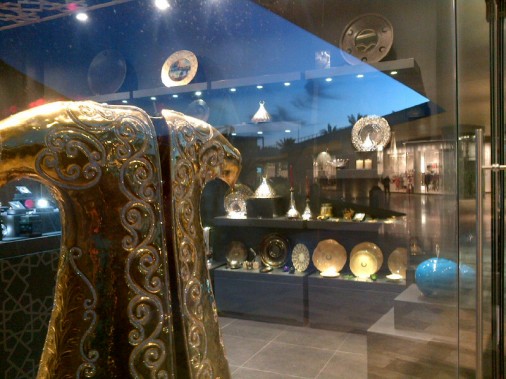 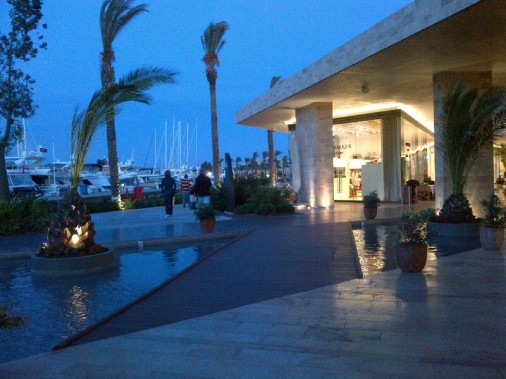 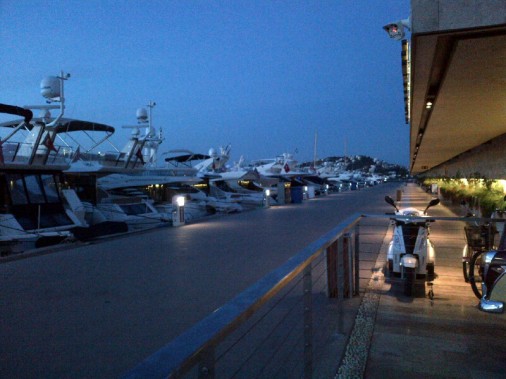 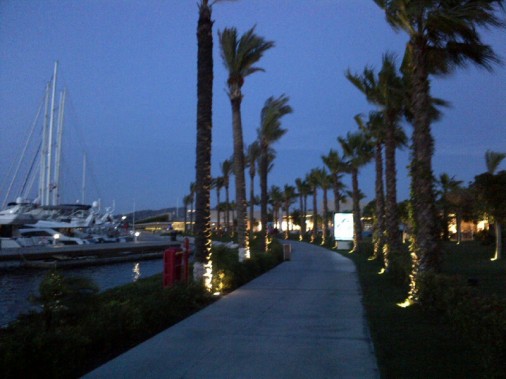 In case anyone was wondering what had happened to me, how I could be so immediately and completely bewitched by tinkling fountains, lingerie, chocolate fondants  and a bit of plate glass, I would just like to say that lunch was not at the “Billionnaire”, but at  “Bag Arisa,”  a small taverna set in a garden of olive trees and wreathed in vines, in a small backstreet of the village of Bitez. Its whitewashed walls are completely covered with Umuhan’s certificates, prizes, thank-you letters and photos of celebrities, and Istanbullis keep this little restaurant  very  secret. Tamera knows her stuff though, and is also next door neighbour, so  we were invited to join Umuhan and her friends for  seafood spaghetti and parsley,  tomato and bean salad. Umuhan’s fisherman husband dozed off happily  in  the viney shade,  while a trio of comely youths, one wearing cherry-red lipstick for some reason,  chopped herbs  and vegetables for the evening menu.

This eclectic little group also included  our friend Harry; a senior producer at 60  Minutes, a silent lady professor from Istanbul, and  Umuhan’s friend Tuvana Sultana  who offered to read our coffee cups. Tuvana Sultana is also a belly dancer and an astrologer, and was  tremendously over-excited by the whole occasion. She saw angels hovering over Harry, she saw auras crackling over Tamera, and joyfully raised her glass of raki every few minutes in what is possibly the best toast I have ever heard, for which she summoned up her best English; “Spontan Happy days!”    Indeed.

In case you are interested,  I am glad to say that in my coffee cup she saw that I am about to meet  a tall Italian built like Hercules, and come into a lot of money  in April. Unconnected I hope,  as I wouldn’t  want a tall Italian sniffing around after my new found wealth.  I can look forward to returning to Bodrum and hitting  those plate glass atriums in the Palmarina,  and then boarding my private Gulet with a large Louis Vuitton suitcase full of lingerie, chocolates and jewellery.

Ah, the scent of money….