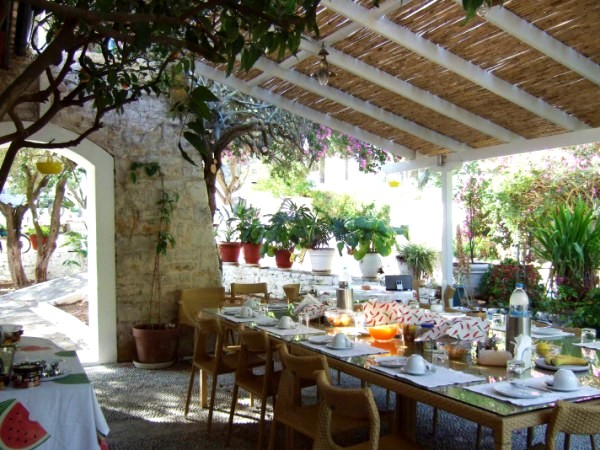 I woke up this morning to a big grey cloud that burst as I was having bread and honey for breakfast on the veranda – the rain banged on the cane pergola and a thunderclap with lightening flash made us all jump and shriek. The smell of hot earth and herbs steaming in the rain is one if the great smells in the world, and worth getting wet for…. In the afternoon a clear blue sky washed clean reappeared, and the birds started singing again.

An email was sent around by the Greek Tourist Board – their response to the major tourist crisis hitting Greece? An invitation to enjoy a “Greek Beach Day” on the south bank of the river Thames, with sandcastles, face–painting, beach volley-ball and Greek dancing – admission free!
We did have a forlorn hope that it was a joke, but no, it was true. Perhaps Angela Merkel could have a quick word with them.

The Villa Skinos cook, Sofia, has just been given the all clear for some cancer tests that she had. In celebration, she baked chocolate truffle cake for everyone. Greeks celebrate all occasions with cakes. When Sofia’s son had his first tooth, she made a sensational Halva (semolina, honey and almond cake). After that, I would ask her every now and then if little Odysseus (his name) had had another tooth, and the next day a Halva would appear. Odysseus has grown up to be a strapping young boy – one would never guess that, like a Great White Shark, the poor child has about three rows of 48 teeth…