Honestly, how could one ever leave the important business of locating Odysseus’ palace to archaeologists? With this report, I would like to introduce you to the new discipline of Psycho-archaeology.

I escorted a group of friends and relatives up to the new found site of Odysseus’ palace on the side of the northern part of Ithaca, that I had also not yet seen. The friends and relatives included a lordly bunch of aristocratic, landowning, castle-residing, serf-owning (not really, just joking,) nobles. They strolled up the hill to the cyclopean walls and trenches dug by the predominately proletarian team of archaeologists from not very noble Yannina University, sniffed the air, scanned with hunters’ eyes the horizon for prey/enemies/convoys of visiting relatives/royalty, conferred amongst themselves briefly, and then pronounced the site  to be quite clearly a dud.

“No nobleman would ever want to build a palace here,” they  said, turned their backs on it and started walking down the hill. I followed them down whining, “But why? What’s wrong with it?”

Patiently they explained that although the archaeologists were well-meaning, the site was obviously only suitable for lesser nobility, so perhaps one of Penelope’s less successful suitors had lived here. Or the Mayor, or some elected official from a bourgeois background.

Crushed, and suddenly doubtful about the site’s authenticity myself, I took them the next day to the  saddle of land at the waist of the island, from where thyme blows, wild mint releases pungent fumes as you tread it underfoot, and a small chapel with a large goat bell hung outside it for the priest to ring,  stands above the Mycenaean remains of a temple of Apollo.  Trenches dug by a now largely discredited team from St Louis Missouri revealed Mycenaean rubble and  a plaque with Odysseus’ name on it. Heinrich Schliemann dug the mountain top above over a hundred years ago, roof tiles and walls from 5,000 years ago till Byzantine times lie scattered around. Two sparkling blue seas as Homer described, are clearly visible as one looks east and west, no friend/foe/pirate/visiting relative or cattle rustler could move an inch by foot or water without being seen by hunter-eyed look-outs. Wheat fields and harbour lie conveniently close-by down in today’s Vathi,  and strategic command of both sides of the island is assured ;  Penelope’s suitors who as we know were a quarrelsome and treacherous bunch, would have been well bottled-up in their inferiorly located palaces on the north island with their rather more bourgeois views.

“Yes,” they said, satisfied. “This is much better, this is where a king would have built his palace.”

And that was that. 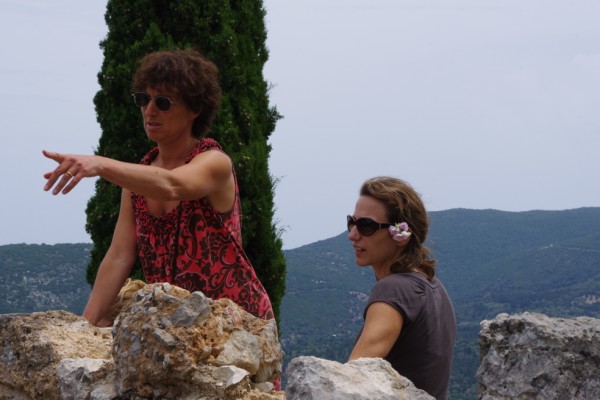 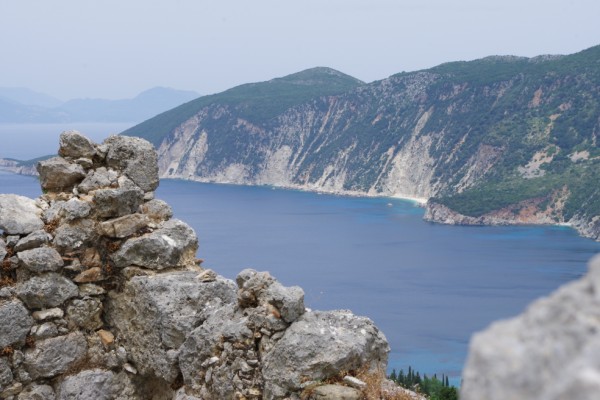