A rather late posting, but better late than never….

Skopelos is home to an eclectic group of people who go a bit native there –  documentary film makers, artists,  the designer Marc Held, and Martin Beckett, a giant in the world of advertising photography and president of the Association of Photographers. Martin  is wearing a white(-ish) wife-beater and  shorts,  his grey curls hang down,  and an olive green sweater matches his olive green eyes. Between  advertising campaigns, he builds houses for people,  to stop others doing them badly. Next week he is off to address the European parliament on artist’s rights. 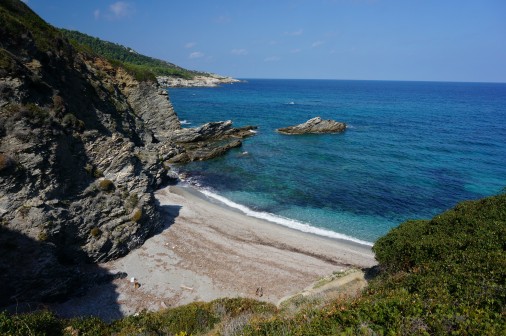 I am on the trail of some amazing sounding houses to enable you to go and experience the charm of Skopelos for yourself,  one of which I wrote about earlier, belonging to Marc Held, and Martin kindly volunteers to drive me around and show me his favorite spots, including  his own house with views to die for.  Basil the terrier is sitting in the passenger seat of his beat-up car which is one of a series that he drives into the ground and then throws away. Basil is recovering from a torn cruciate ligament and does not want to go for walkies, but the sun is hot, so we drive over the roads slashed and rutted by the late summer rains of last week, under the green glowing pine trees, down to some of the least accessible beaches and thoroughly test the water for clarity.

A late lunch of sardines, anchovies and friend zucchini in the warm October sun down in Loutraki,  shooing cats off the table, while Martin makes me laugh  so much that I miss my ferry boat back to Skiathos to catch the plane to Athens. He was on the island during the filming of Mamma Mia and the islanders were not too sure who all these film stars were –  other than there was James Bond amongst them. “Martin,” one of them called to him excitedly, “Come quick, there is Piers and Streep down in the beach bar,” which in Greek came out as “Piss and Strip”. Which is what the bar is still known as. 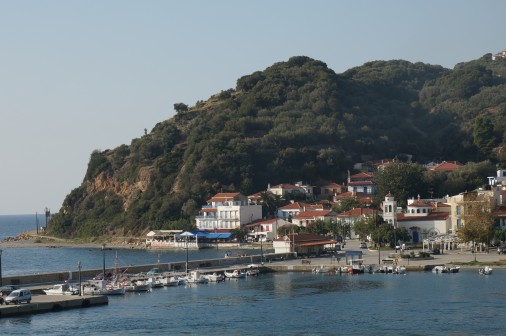 I not only missed my ferry, but I failed to inspect another house as the caretaker supposed to be letting me in was nowhere to be found. As I was about to board the last ferry  of the day across to Skiathos,  he appeared at the jetty grinning. “Why didn’t you answer your phone” I asked him curiously. “Because I turned it off” was the answer.  Greek logic.  So if any of you want to know my personal opinion about Skopelos AK, I can’t tell you.  I am sure it is just fine,  and I did see it from the road above, roof looks good, position is great. The sea below is blue, but, I guess I will have to go back to Skopelos to check.