“We don’t call them pigeons, we call them  “Twenty-twoooos,” because  that is what their call sounds like,” said the old lady who runs Vangelis, one of the two tavernas in  the main piazza in Chora, which turns into one large, elegant, open-air drawing room in August – Patmos is home to six princes, at least 10 counts, 7 famous designers, and various other notables.  The clientele is fanatically loyal;  visitors come every year and take the same houses and socialise with eachother.  Mrs Vangelis wouldn’t let me take a photo of her, “as I don’t want to appear in any of those glossy magazines..”

The priest who dropped in for a coffee suggested I take one of him instead, so I did. 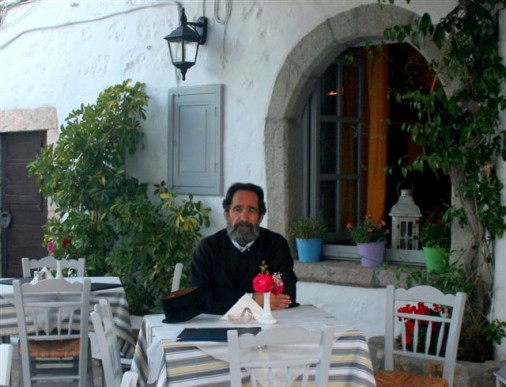 The Twenty twooos cooed and fluttered around, and we admired the one who had been given a bread basket by the taverna to nest in.  One particularly macho  Twenty-Twoooo  puffed up and strutted for his mate, who just looked blank and rather bored at the end of his display, but a partridge did drop in to watch…. 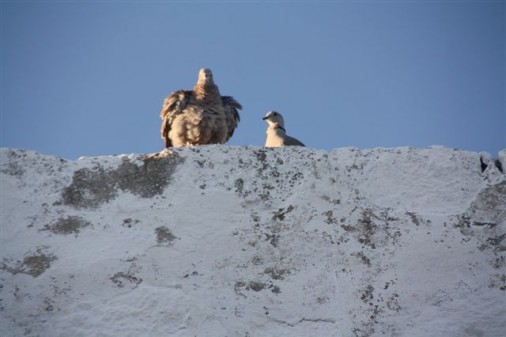 A macho Twenty twooo displaying to his mate. 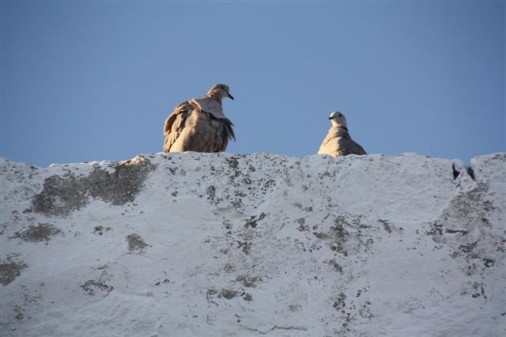 Seen it all before...still not impressed.

The Monastery dominates Chora, the citadel village which is where the scene is, medieval lanes wind in a maze up and down and around, but wherever you are, the crenellations of the monastery soar above you. St John the Divine wrote the book of Revelations here and this has stamped the whole personality of Patmos. The monastery houses great treasures of the Byzantine world, so demure dress (no trousers for women and no shorts for men) is a requirement for visitors. 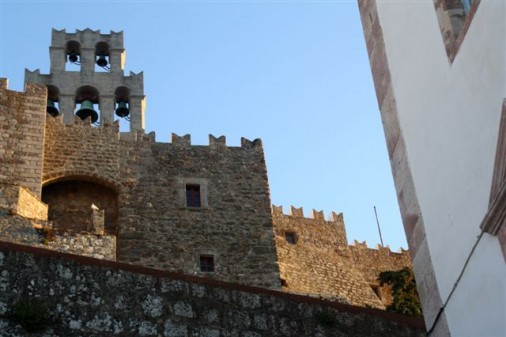 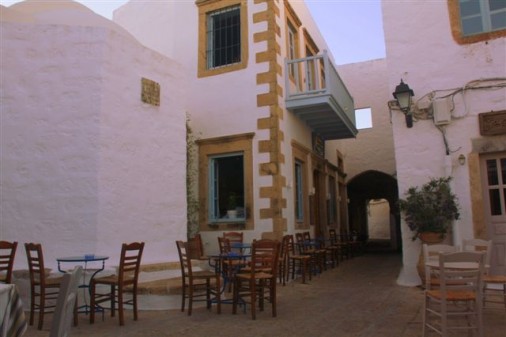 The Chora houses are bijou village houses and the only ones in Greece where A/C and pools are considered vulgar – far more important to have a sublime kilim on the floor, a  17th century coffered ceiling above,  far -reaching views of the  coast below and the hilltop church of St Ilias opposite from your sunset-rosy roof terrace with a pink Aperol in front of you, and the perfect shade of dove-grey paint on the woodwork to complement the pale honey stone of the walls. The Almanach de Gotha fights tooth and nail  with the Libro d’Oro to possess these houses,  and newcomers stand little chance, even with us helping. 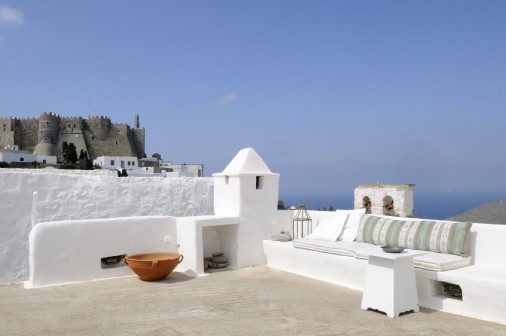 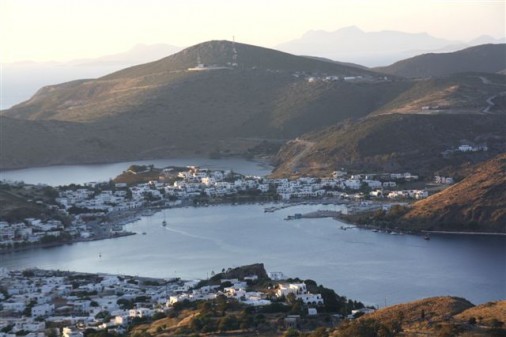 We like to accessorize these houses with a 12 metre wooden caiki called the Laerti, which  is over 100 years old, and has been lovingly polished and renovated by its owners, or with a sleeker Riva which can be brought over for a week  from Mykonos to take guests on day trips  to the smaller outlying islands, and beach days locally with lunch in a taverna. 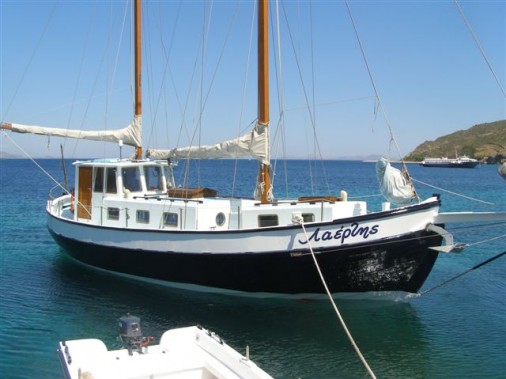 Those  amongst you who want a garden,  properly flushing loos, a/c, a pool,  great service and modern conveniences, with a beach within spitting distance, don’t despair – we have an amazing house coming up in August. The dove-grey paint is still drying….

The nicest hotel to stay in is the small  family boutique hotel “Petra”  down in Grikos – near Petra beach.  Petroula and Jason are fabulously hospitable, the 12 or so rooms offered are all beautifully appointed, and the cuisine is truly exquisite –  a great addition to the Patmos dining scene. The  breakfasts  are the best I have ever had, with home baked pastries and cakes, cheese pies, eggs, pancakes, all heaped high on the table on a lovely terrace overlooking the bay. The hotel only has 2 stars as Petroula angrily refuses to “incentivise” the Greek Tourist Board inspector who comes from Rhodes once a year.  Shame on him and I hope someone is reading this who should be.  I urge you all to go and support the Petra which should in my book have 5 stars. 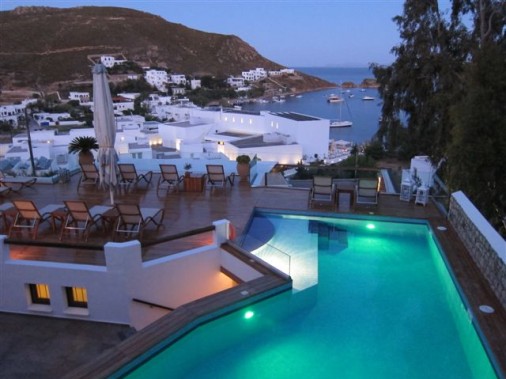 Pool at the Petra Hotel

And no, they haven’t paid me to write this…..